Bruno Fernandes could potentially have to quarantine for 14 days following his return to England from Portugal. The Manchester United midfielder has been back in his homeland following the birth of his son but now he has been affected by a change of English quarantine rules.

Fernandes played in Portugal’s 4-1 win over Croatia last Saturday before having to rush to the hospital to support his wife.

His partner Ana Pinho delivered the latest addition to the Fernandes family at around 12:30am on Sunday morning.

It meant their baby boy was born around four hours after Portugal ran riot in their Nations League match at the Estadio do Dragao in Porto.

To make matters worse, he was forced to provide samples for anti-doping testers after the win to cause even further delay to his frantic journey.

JUST IN: Man Utd think Jadon Sancho ‘will be ready for Crystal Palace match’ ahead of transfer 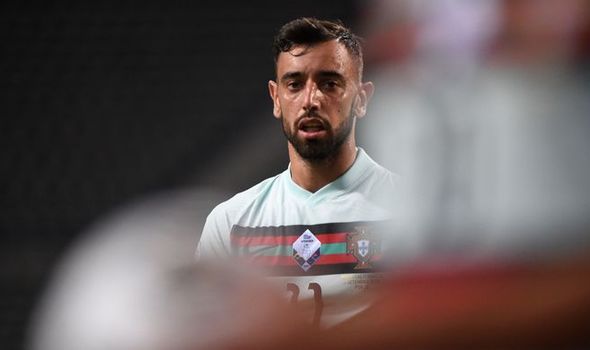 Now Fernandes is set to return to England ahead of the new season with United, who take on Crystal Palace on September 19 in their Premier League opener.

However, Ole Gunnar Solskjaer may have a problem on his hands when it comes to selecting Fernandes in the next two weeks.

That’s because the Government has made the decision to place Portugal back on England’s quarantine list.

The rules officially state that any travellers from mainland Portugal arriving in England will have to quarantine from 04:00 BST on Saturday.

The country had previously been placed on England’s safe list and has therefore been a popular destination for UK tourists.

So far, there has been no suggestion that Fernandes is back in England following his stay in Portugal.

Manchester Evening News journalist Samuel Luckhurst tweeted: “Bruno Fernandes has not been at Carrington this week post-internationals as his wife gave birth in Portugal. If Fernandes has been staying in Portugal this week (which he presumably has) he has to have travelled back to the UK before 4am tomorrow to avoid quarantine.”

If he has yet to return, he will have to rush back at some point tonight if he wants to feature in their season opener.

Fernandes is already set to miss the club’s final pre-season friendly against Aston Villa this weekend.

He will then use next week to get up to speed and convince Solskjaer that he is worthy of a start against the Eagles at Old Trafford.

Given his importance to Manchester United, it would come as a huge surprise if he remained in Portugal overnight and past the 4am cut off point.

Fernandes was United’s driving force in the second half of the campaign and was a key figure behind Champions League qualification.

He has already enchanted supporters and the club’s fanbase enjoyed his recent post confirming the arrival of his child. Fernandes said on Instagram: “September 6, 2020, when many thought that at the end of the national team’s game that Bruno Fernandes had not scored a goal they were wrong!

“Today, 38 weeks and 6 days ago, I scored one of the most important goals of my life and had to wait a distance of almost 9 months, anxious to see the ball hit the back of the net.

“When the game was over many of you said “you didn’t score a goal”, but you were wrong because despite the final whistle, one of the two best shots I ever took in my career was about to go in, but not without the delegate calling me for anti-doping right after the game.

“After those moments plus a few hours, behold! the ball went in – or in this specific case Goncalo de Pinho Fernandes decided it was time for his father to score the second important goal in his life!

“And so at 00:39 on the 6th of September my wife @anaapinho_ once again made our life gain even more life.”

Nine NFL teams poised for playoff breakthrough in 2020, including two that haven’t gone in more than a decade