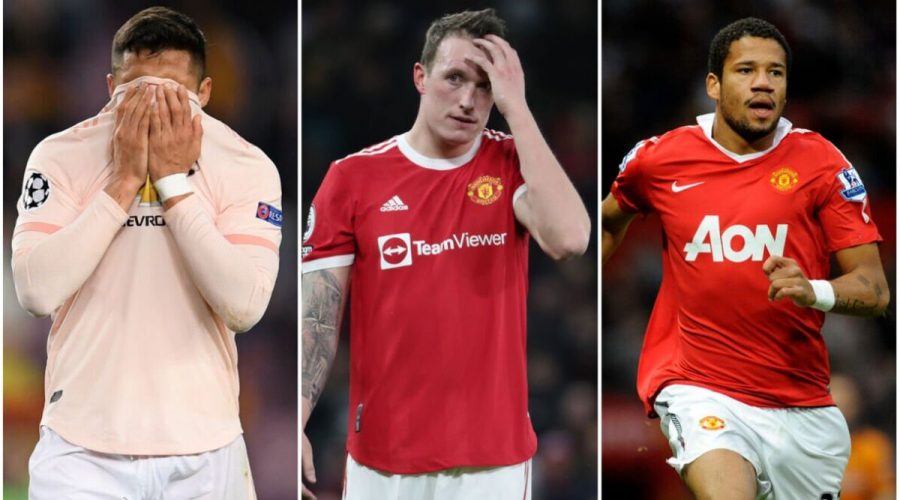 Manchester United defender Phil Jones is finally approaching the end of his contract, which will surely spell the end of his troubled and costly 11-year stay at Old Trafford once the summer rolls around. Funding his wages for so long has supposedly seen United rack up a hefty £54.5million final bill for the 30-year-old, who has hardly played for the last four years, but is he the biggest flop in the club’s history? Express Sport takes you through where Jones places in the club’s unfortunate top five…

Legendary former United manager Sir Alex Ferguson admitted that he green-lighted the £7.4m signing of Bebe without even watching him play. One of the club’s scouts in Portugal was supposedly ‘adamant’ that they had to move quickly for the 6ft 3in winger, with Real Madrid and Benfica also showing interest at the time.

Having made just seven appearances in his first season, Bebe didn’t feature at all for United over the subsequent three before he was auctioned off to Benfica in 2014. Although it wasn’t a deal with quite the same financial implications as Jones, it was still an embarrassing mishap for the Red Devils’ scouting department.

The Dutchman is now into his third season in and around the United first team, and things aren’t going well. Van de Beek was seen as one of the crown jewels in a talented Ajax side that powered to the Champions League semi-finals in 2018/19, prompting the Red Devils to shell out a whopping £39m.

Pocketing reported wages of £120,000 a week, Van de Beek has notched just two Premier League goals during his spell at Old Trafford, with only 24 appearances in all competitions since the start of last season. The 25-year-old has been tipped to come good on multiple occasions, not least when former manager Erik ten Hag took over during the summer, but things still aren’t clicking with just over two years left on his contract.

United fans rejoiced in the feeling that they had signed a wonderkid when Zaha was snapped up from Palace for a hefty £15m fee in 2013. The tricky winger was only 20 years old at the time but he was still expected to make some form of impact on the first team, having already played almost 150 matches for Crystal Palace in the Championship.

It goes without saying that Zaha fell wildly short of expectations, embarking on loan spells to Cardiff City and back to Palace while complaining about not being given a chance by David Moyes. After just four appearances in all competitions, the Red Devils were forced to take an embarrassing loss on the Ivory Coast international, receiving just £3m in 2015. Their pain has since been compounded by more than eight seasons of consistent goalscoring at Selhurst Park.

The Preston-born defender was still a teenager when Ferguson snapped him up from Blackburn Rovers in 2011. Despite his young age, Jones played plenty of football during his early years at Old Trafford, which is the only thing saving him from appearing at the top of this list.

Capped 27 times by England, Jones had racked up 163 league appearances for United by the end of 2018/19, but he has notched just six more in the four subsequent seasons. Still banking big wages until his contract expires in June, Jones has supposedly cost the Red Devils a total of £54.5m in salary and transfer fees, including a ludicrous average of £1m per game over the last four years.

The Chilean wasn’t at Old Trafford anywhere near as long as Jones, but his extortionate wages meant he still inflicted a huge amount of financial damage. Sanchez was signed in a swap deal with Arsenal involving Henrikh Mkhitaryan, but it still evolved to become terrible business as he earned a huge £560,000 a week and was paid £9m more to rip up the final two years of his contract.

The former Gunners talisman was expected to make a huge difference at United, and it was seen as a major coup when they pipped rivals Manchester City to his signature. But after all that money and hype, Sanchez netted a bitterly disappointing five goals in 45 appearances across 18 months, making him the biggest flop in the club’s history.