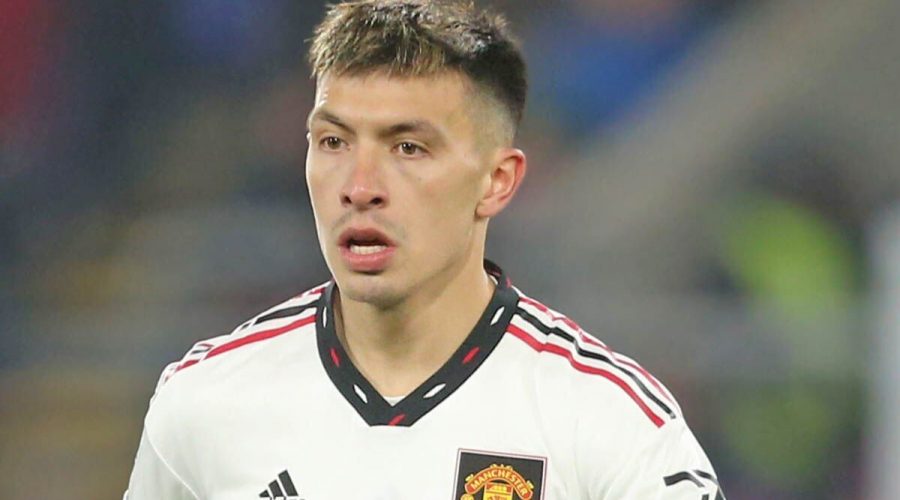 Manchester United star Lisandro Martinez has posted a picture from his recent birthday celebrations. The Argentina international has taken to social media to share an image of himself and his girlfriend, Muri Lopez Benitez. And he’ll be hoping for a late present when the Red Devils lock horns with Arsenal on Sunday.

Martinez turned 25 on Wednesday, with the United star then featuring in his side’s 1-1 draw with Crystal Palace.

And the Argentina international has now shared an image of himself with his partner, with the pair both smiling.

Girlfriend Muri looked classy in a black outfit, with the pair arm in arm in front of a huge collection of gold and black balloons.

Martinez has been with his partner for a number of years, now, with the pair reportedly getting together when they were teenagers.

They have supposedly been together since 2012, but are yet to get married or become engaged.

Muri is a professional dancer, and moved from Amsterdam to Manchester in the wake of Martinez’s decision to join United.

Now, the centre-back will be hoping for a late present when his side lock horns with Arsenal in their crunch Premier League clash on Sunday.

United will go into that game after a midweek setback, having drawn 1-1 with Crystal Palace on Wednesday.

Bruno Fernandes opened the scoring at Selhurst Park, with the United star netting for the second game in a row in the process.

However, the Red Devils ended up being pegged back at the death with Michael Olise netting a stunning free-kick to earn Palace a point.

United will be hoping for a repeat of what happened when they faced Arsenal at home, back in September.

Antony put Erik ten Hag’s side ahead in the first half, opening his account for the club on his debut.

And while Bukayo Saka was able to draw Arsenal level, a brace from Marcus Rashford ended up giving the Red Devils all three points.

Speaking before the draw with Palace, meanwhile, Martinez opened up on his childhood and the role his father has played in his career.

“[When I was] about 13, very young, my parents confronted me,” he told club media.

“So he set that scene and, once my father took me with him. I remember that I had to be there at seven in the morning. And I overslept, imagine that!

“I got there for around 10.30am or 11am. When I arrived, my father just looked at me. I remember it like it was yesterday. He looked at me and said: ‘Do you realise that this isn’t for you? You need to have a career in football. Football is your thing.’

“And that’s when the penny dropped for me.”

And he added: “I think [the experiences influenced me] a lot.

“A great deal, because that means I never forget where I’ve come from. I also think that there’s something in me that I was born with, which is probably my mentality.

“I’d see things, as a kid, that maybe others didn’t. But life itself is tough, you’re always faced with tough times and that’s where you need to show your mental strength.

“It’s true I come from a family in which we didn’t have everything. Nothing ever fell from the skies. But my family have always supported me a lot, they’ve instilled many values which make me who I am today.

“And then you start improving as a person, you work on lots of things, you learn, you experience things.

“So I’m very proud of everything I’ve gone through and it’s that strength I have today.”