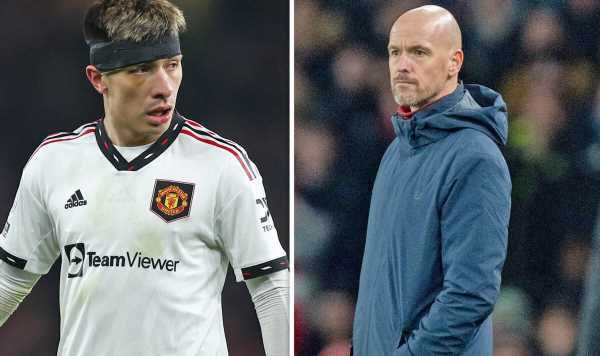 Manchester United star Lisandro Martinez has agreed with Erik ten Hag over the need to ‘focus’ in the wake of the Red Devils’ 3-2 defeat to Arsenal on Sunday. The Argentina international opened his account for the club at the Emirates Stadium. However, it wasn’t enough to give his side anything from the high-octane contest in the capital.

But it wasn’t enough for the Red Devils, with the Gunners emerging victorious courtesy of a brace from Eddie Nketiah and a long-distance strike from Bukayo Saka.

It was a disappointing day for United and, in the aftermath of the game, Ten Hag called on his team to be ‘100 per cent focused’.

“We already have seen how the mentality from the players has changed over the last couple of months,” he said.

“But we also have to notice [that] today [against Arsenal] that we still have a way to go and to be on top level.

“I also told the players: ‘If you want to win trophies, titles – we have to change our mentality.’

“It is not possible that you are in a top game, making three such big mistakes, where you concede goals and especially the last goal. You have to feel the game.

“You can’t give such a goal away like we did and on [the] top level then you can’t win trophies.

“[We have to be] 100 per cent focused, do the sacrificing, do the suffering, follow the rules and the principles.”

And Martinez, speaking to club media after the game, has agreed with his manager.

“I think we can win the game today,” he said. “But this is about details. If you are not [focused on] every detail, you can’t win.

“We have to be really focused on the game and we have to kill the game. We have to win.”

Martinez also admitted United players were disappointed after the game, though vowed they’ll do their best to bounce back.

“For sure we are disappointed,” he said. “We want to win the game, but we didn’t, and we are very disappointed.

“But we are strong, we have to keep fighting and we go for the next one.”

But while the 25-year-old was disappointed by United’s failure to win, he was happy to score his first goal for the club.

“For sure, it is a dream to score my first goal here in Manchester United,” he said.

“I am really happy with that, but in the end it was not the result that I want. We have to keep going.

Next up for United is a Carabao Cup clash against Nottingham Forest on Wednesday night (8pm).