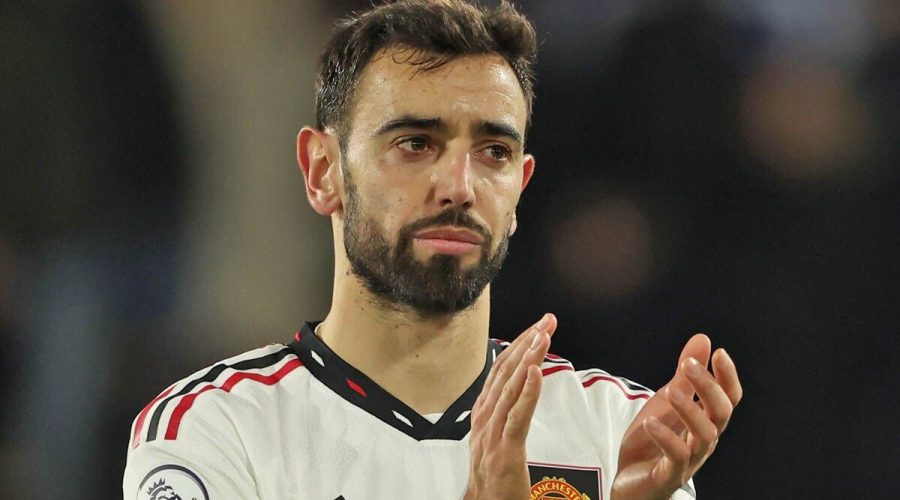 Manchester United star Bruno Fernandes has aimed a sly dig at Ole Gunnar Solskjaer and Ralf Rangnick ahead of his side’s Premier League clash with Arsenal on Sunday. The Portugal international is currently flourishing under Erik ten Hag. And he feels the Dutchman has brought a confidence back to the club after a couple of turbulent years at Old Trafford.

But, despite the setback, the Red Devils are still enjoying a far better campaign than last time out.

United toiled under Solskjaer before his sacking in November 2021, with a 4-1 defeat to Watford at Vicarage Road triggering his departure.

And the Red Devils’ campaign then went from bad to worse under Rangnick, who failed to get the best of any of his players prior to his departure.

Under Ten Hag, United have become a club transformed with the Red Devils the only side in the country who can technically win all four competitions they’re in.

And Fernandes has now aimed a sly dig at Solskjaer and Rangnick by saying Ten Hag has lifted the confidence of his squad.

“This will not affect the team, for sure,” he said, referring to the draw with Palace.

“We can’t be affected by a result that was not the way we would like it to be. We’re doing great things.

“I think the team now is confident, players are playing really good, they are showing themselves, they’re doing what they have to do and what the managers asked us to do and we have to carry on with that, it’s a responsibility we have to do.

“It’s still a good moment for us, we’re still doing great things, we have to go to the next one and try to win.

“It’s confidence. Last season, the last two seasons have been really difficult, the confidence of the players was really low.

“I think that’s why results weren’t coming, even when it was a tough period it was difficult to come through that.

“United was in a race to win at Palace, but we didn’t. Now our race is to win the next one, that is our race, game by game, three days by three days, we just have to think on to the next one.

“Obviously, a draw is not enough for us, we want to win the game and we didn’t.

“It’s gone now, there’s nothing we can do about this one. Just recover, be ready for the next one, understand what we did wrong in this game to make sure we don’t do it in the next ones, and carry on.

“We can only do the counting at the end of the season so we have to win every game we have to look ahead, the next one is Arsenal away.”

Fernandes has now scored for United in back-to-back games.

His strike against Palace came just days after he’d netted an equaliser in the Red Devils’ stirring 2-1 win over Manchester City.

Yet Fernandes remains unfazed by individual statistics and believes only results ultimately matter.

“It’s football, it’s not always the way we want.

“I would like to perform every week good, every week scoring goals and assisting my teammates, but it’s not possible. It’s possible, but I don’t do that.

“I’m happy for what the team is doing and what I have to do and need to do is help the team in any way I can and I think I’ve been doing that and I have to carry on in that way.”

United will be hoping for a repeat of what happened when they faced Arsenal earlier in the season.

The Red Devils won 3-1 at home back in September, with Marcus Rashford bagging a brace and Antony also on target as they claimed all three points.