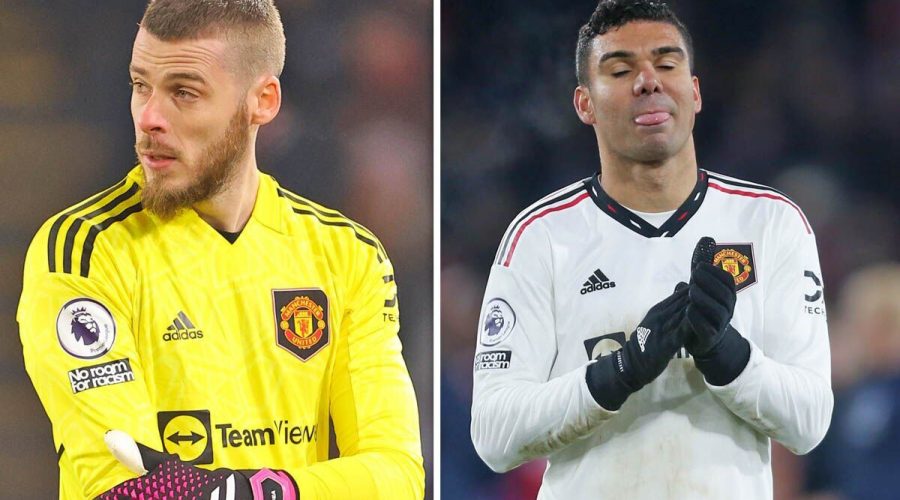 Manchester United star David De Gea has admitted Casemiro will be a big miss against Arsenal on Sunday. However, the Spain international has also backed his team-mates to step up in the absence of the midfielder. The Red Devils will go into the game knowing victory will boost their chances of a first Premier League title since 2013, back when Sir Alex Ferguson was manager.

Manchester United have seen the best of Casemiro since his summer arrival from Real Madrid, with the 30-year-old becoming a key player for Erik ten Hag.

However, following his fifth yellow card of the season against Crystal Palace on Wednesday, the midfielder will be missing against Arsenal on Sunday.

It is a huge miss for United, especially given the veteran’s fine form.

Yet De Gea, speaking to The Mirror, believes the Red Devils can cope without Casemiro – backing his team-mates to step up and deliver in north London.

“All over the pitch he’s helping the team — defensively, attacking — he’s one of the best in the world in his position for sure,” he said.

“His experience is unbelievable and he’s great to have in the team.

‌“But we have more players who want to play and will show their qualities.”

Like many of his team-mates, De Gea struggled at the start of the season.

The United stalwart, who has been at the club ever since moving from Atletico Madrid in 2011, made errors against Brighton and Brentford.

Since then, however, De Gea has bounced back – with the United star silencing his critics in the process.

And the 32-year-old has claimed he’s learned to drown out the noise in order to re-establish himself as one of the best goalkeepers on the planet.

He said: “I don’t have to show anything, I have shown already for many years my qualities.

“I know people love to talk, but I’m used to that.

‌“I’m just performing as well as I can, helping the team and trying my best all the time.

‌“Experience makes it easier to block out the noise.

‌“I live a lot of things, I get through many, many difficult moments.

‌“I don’t care to be honest, I just focus on my games, on my training and on my team.

For the first time in years, United and Arsenal are now title rivals once again.

The Red Devils can move to within five points of the Gunners at the top of the Premier League table if they’re able to emerge victorious from their tantalising clash.

And De Gea has admitted it’s ‘nice’ to see the two rivals getting back to where they used to be, adding: “Both teams have always been massive clubs, great teams, always playing to win trophies.

“So it’s nice to play now when both teams are in a good shape and playing well.

‌“It’s going to be a massive game. We want to win and we will go to London to try to beat them.

“They always have quality players, they want to play from the back and fast players in front.

“I remember the game with 14 saves, that was a great game, especially because we won.

‌“Hopefully, I can make another big game. It could be a massive three points for us.”

United beat Arsenal 3-1 earlier in the season, with Antony on target and Marcus Rashford bagging a brace.

However, they lost by the same scoreline at the Emirates last term in a match that was overseen by interim boss Ralf Rangnick.