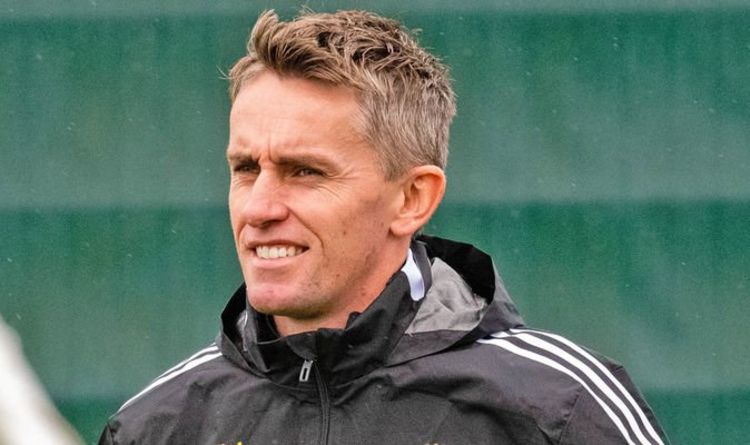 Manchester United players think Kieran McKenna is ‘dry and school-teacherly’ ahead of tonight’s Champions League clash with Villarreal, reports say. The Red Devils go into tonight’s game seeking a return to winning ways. And Michael Carrick will take charge for the contest following the departure of Ole Gunnar Solskjaer.

Manchester United gave Solskjaer the boot on Sunday, less than 24 hours after they’d fallen to a heavy 4-1 defeat away at Watford.

Carrick will now temporarily take the reins while the club hunt an interim, and then permanent, replacement.

Helping the 40-year-old will be McKenna, who was a vital part of Solskjaer’s coaching setup during his time in charge.

Yet the Daily Mail claim United players are unhappy with the young coach ahead of tonight’s Champions League clash.

It’s claimed they believe he’s ‘dry and school-teacherly in his delivery’.

And they’ve also wondered how he’s risen to such a position of power, despite only being 35 years old.

McKenna previously worked at Tottenham and some at Spurs are said to be ‘surprised’ at his role at United.

But whether the Red Devils squad can put their problems with their coaches aside this evening remains to be seen.

United have been fortunate in the Champions League this term, often relying on Cristiano Ronaldo to save the day.

They lost 2-1 in their opening fixture of the competition, going down to Young Boys in Switzerland.

United were then facing another defeat at home against Villarreal before Alex Telles and Ronaldo struck to save the day.

Ronaldo was again the hero as the Red Devils rallied to beat Atalanta 3-2 at Old Trafford, with Harry Maguire and Marcus Rashford also on target.

And the Portugal international salvaged a draw in the return fixture in Italy, netting twice.

United skipper Maguire faced the media on Monday and urged the Red Devils to get the job done.

“Yes, it’s been a difficult couple of days for the lads, really emotional,” he said.

“It’s never nice to see a manager lose his job, especially someone who’s been so good to a lot of players here and a lot of members of staff, and the values that he has, and the journey that we’ve been on together over the last two or three years.

“Yesterday was a tough day for everyone, a really emotional day, saying obviously goodbyes but I’m sure we’ll stay in touch.

“Ole spoke to the group of lads and he’s going to be there supporting us, wanting us to do well, and that shows his values and what he thinks of this club.

“Obviously he’s a legend of the club and as a group of lads, we’re disappointed that we couldn’t do enough to improve the performances and the results.

“Ultimately now, we’ve got to look forward now to a game against Villarreal that’s a really important game in our season.”

He added: “Yeah we know them from the last two games, we’ve obviously played them a lot in recent months.

“We know they’re a good team, we know that we’re going to have to perform well to get the victory that we want and that’s what the focus is on now.

“We’ve got to make sure the boys are ready, everyone’s together now and we push each other hard to make sure we go into the game with a positive mindset, with confidence and belief that we go there and get the job done.”

United have never beaten Villarreal away from home.

They’ve drawn on their two previous matches with the La Liga giants, with both coming under Sir Alex Ferguson.