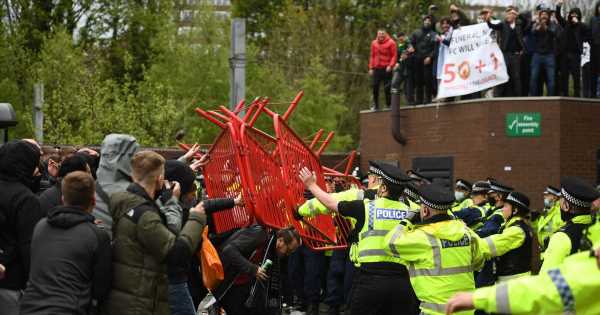 Manchester United are on a collision course with the Premier League after defending their handling of the violent fan protest at Old Trafford.

Sunday's high-profile fixture with Liverpool had to be postponed after the demonstration involving thousands of supporters against American owners the Glazers spiralled out of control.

Fans clashed with police outside the ground while hundreds more smashed through barriers and gates to get onto the pitch to swing on the crossbars, pinch corner flags, throw flares, damage TV cameras and infiltrate corridors.

The Premier League has launched an investigation into how the carnage was allowed to happen – and demanded answers from United and Greater Manchester Police (GMP).

United are under pressure to explain how a security cordon at Old Trafford was breached by protestors, who were then able to gain access into the stadium via the Munich tunnel and disabled section.

CCTV footage shows scores of fans bursting through a door by the tunnel area, which was opened from the inside by protesters who had already gained illegal access to the stadium.

Further footage shows security personnel at Old Trafford allowing fans to walk through an open door into the stadium.

United had been given advanced warning of the protest and Premier League bosses fear the club's security operation and policing levels were inadequate.

But United, who could face sanctions including a points deduction, fine or ground closure, insist their staff were following orders not to challenge protestors and risk inciting trouble – to put their own safety in jeopardy. United say they had planned for a "peaceful protest" and that deploying more stewards, robust crash barriers and a greater police presence would have sent out a "confrontational" message the club wanted to avoid.

But this decision proved flawed when fans went on the rampage, forcing GMP to draft in extra officers from neighbouring forces to help bring the situation under control.

GMP Assistant Chief Constable Nick Bailey said: "The behaviour shown at this protest was absolutely atrocious. Officers were just trying to do their job and facilitate a peaceful protest. "However, a number of those present became hostile and aggressive towards officers and forced entry to the football grounds, making it very clear that this protest was not peaceful and ruining it for the majority of protesters who had not intended for the protest to become violent.

"Our officers tried to engage with protestors, but were met with violence and aggression which resulted in enforcement action being taken.

"Enforcement will always be a last resort, but in these circumstances it was deemed necessary in order to maintain safety during a situation that was rising in hostility.

"We are reviewing all obtainable evidence and following all lines of enquiry available to us in order to identify the organisers of this protest as well as those responsible for the officer assaults."

READ MORE: Man Utd protests 'not a problem' for Glazer family – as US owners tipped to keep club

May 4, 2021 Soccer Comments Off on Man Utd on collision course with Premier League over fan riot
NFL News