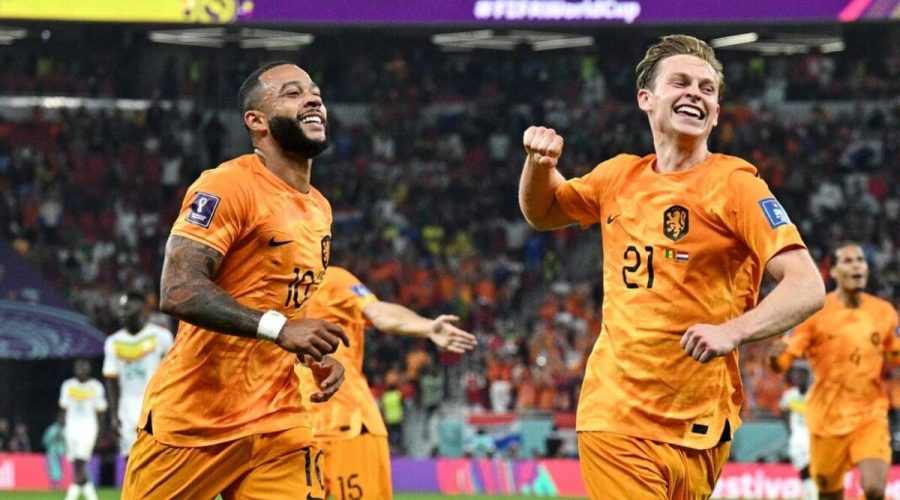 Manchester United have three transfer lessons to ponder after Frenkie de Jong, Denzel Dumfries and Cody Gakpo all played in the Netherlands’ 2-0 win over Senegal in the World Cup. The trio have all been linked with a move to Old Trafford in the past and Erik ten Hag will have been watching their performances closely as he weighs up whether to make another move for them in the future.

Here, Express Sport looks at how the three players fared in the success over Senegal and detail what United may have thought of their performances.

The Barcelona midfielder was the player who was most heavily linked with a move to the Red Devils over the summer with the club involved in a very public pursuit for his services. However, they were not able to get the deal over the line with the Dutchman preferring to stay in La Liga.

The 25-year-old was not at his best at times during the 2-0 victory as he struggled to get a hold of proceedings in a game of little quality. Yet, the technician was still one of the better players on the park and provided the one moment of real quality, with his beautiful cross setting up Gakpo for his nation’s vital first goal. Ten Hag will have been impressed by his ability to make a difference when it really mattered.

JUST IN: Harry Kane injury concern for England as star seen with strapping

Gakpo was on the receiving end of De Jong’s moment of magic to head home the Netherlands opener but his all-round performance did not match that of his teammate. The 23-year-old flittered in and out of proceedings and was called out by popular commentator Ally McCoist during the match, with the Scot still unconvinced by the player.

However, he was still alert to make a difference with good movement ensuring he had the space to score. Ten Hag will be looking to see more of this in his future displays in the group as he looks for a consistent force in his frontline.

The weakest of the three United targets was Dumfries despite his efforts in helping his team keep a clean sheet against the out-of-sorts opposition. The wing-back’s main role is to provide attacking thrust on the right flank but was unable to exert any real influence on the match.

The Inter Milan star also struggled to contain Watford’s Ismaila Sarr during the first half and looked something of a weak link defensively. This may be enough to put Ten Hag off solidifying his interest in the player given Diogo Dalot’s strong performances in his own box this season.