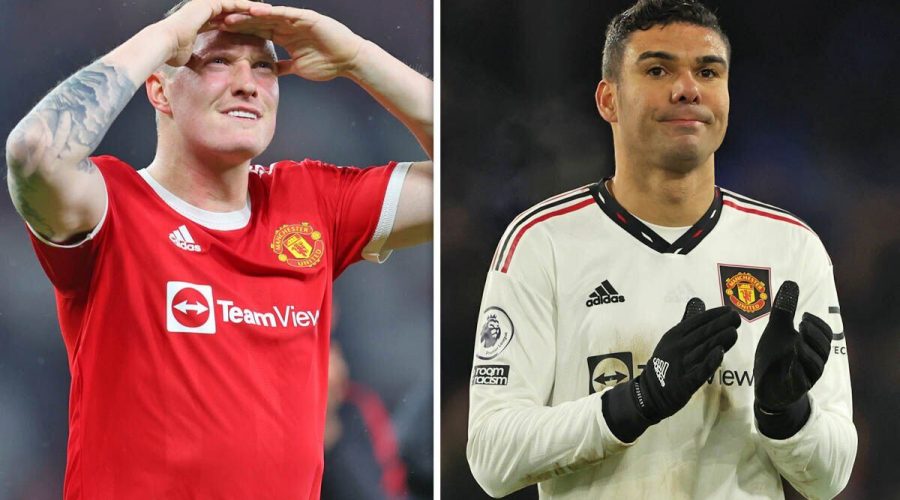 Manchester United suffered two blows on Wednesday night against Crystal Palace. The first was Michael Olise’s late free-kick, with the 21-year-old curling home an equaliser to prevent Erik ten Hag’s side from claiming all three points. And a second was Casemiro’s fifth booking of the campaign which now means he’ll miss Sunday’s crunch Premier League showdown with Arsenal at the Emirates Stadium.

United started Casemiro against Palace because Ten Hag knows there’s nobody like the 30-year-old in his squad at the current moment in time.

But that gamble failed to pick off, with the veteran picking up a suspension following a bruising tackle on Wilfried Zaha in the second half.

Now, United will have to do without Casemiro for Sunday’s crunch clash against Arsenal. It’s a blow for the Red Devils, especially given the sheer magnitude of the contest in the capital.

Many believe Scott McTominay or Fred will come into the team. Both players are options for Ten Hag, who was seen shaking his head in the aftermath of his midfielder’s antics.

Yet Lisandro Martinez is another, despite being a centre-back by trade.

In one way, Martinez is a better version of Phil Jones at Old Trafford these days. Jones, like his team-mate, used to be a versatile option as well.

Many are quick to mock Jones but, during his young years, he was actually a key player for United under Sir Alex Ferguson.

Ferguson liked that he could play in midfield, as well as at the back, and used the 30-year-old in that area of the pitch on occasions during his final two years in the dugout.

Jones didn’t do too badly, either, giving United another option when it came to marshalling the middle of the park.

Unfortunately for the former Blackburn star, injuries have prevented him from becoming the player everybody thought he would be.

But Martinez is another centre-back who can play as an anchorman and could be a shrewd option when it comes to the Arsenal game.

He possesses the tenacity and drive to challenge Thomas Partey, with the Arsenal powerhouse very much a man the Red Devils will need to stop.

Martinez has also shown he has the courage and bravery to play at the highest level, having come through a tough start to life at Old Trafford.

And by playing the 24-year-old at the base of their midfield, it would allow Ten Hag to call upon another of his centre-backs as well.

It would perhaps be the perfect test to show whether Harry Maguire has a future at the club, with the England international continuing to struggle for regular action.

Likewise Victor Lindelof, who has also fallen down Ten Hag’s pecking order since the Dutchman’s appointment back in the summer.

And even Luke Shaw playing there is an option, with Tyrell Malacia ready to step in at left-back if needed.

Whether United do choose to play Martinez in midfield, rather than at the back, remains to be seen.

But they’ll need to be at their best to stop Arsenal from running riot, with the Gunners dreaming of a first Premier League title of 2004 given their fine form.

Meanwhile, reacting to Casemiro’s booking on Sky Sports, Jamie Redknapp admitted Arsenal will be delighted at his suspension.

“It was a moment of madness,” he said on Sky Sports. “You could see Casemiro was furious with Bruno Fernandes, who jumped out of a [previous] challenge.

“That’s why he ends up one-on-one with Zaha and he gets booked.

“It could have been a red card. It’s a scandalous challenge. It’s reckless.

“I could just see Mikel Arteta when that happened dancing around his living room because he is so important to Man Utd.

“They have got no-one who can do what he does in the team.”

January 19, 2023 Soccer Comments Off on Man Utd have a better Jones ready to replace Casemiro for Arsenal game
NFL News