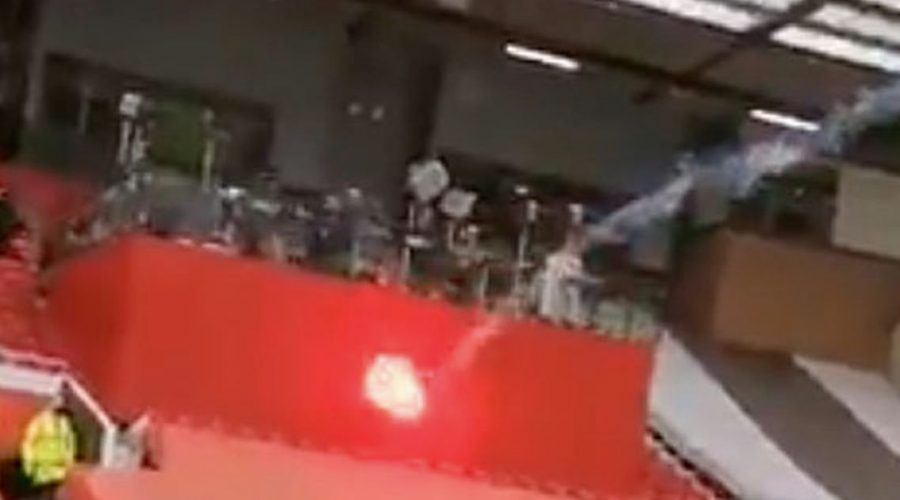 Manchester United supporters gained access to the Old Trafford pitch just hours before their Premier League clash against Liverpool – and one aimed a flare at the Sky Sports studio.

As part of a wider demonstration to try and force an end to the Glazer ownership of their beloved club, a group went past barriers to enter the playing surface.

As chants and songs broke out among the group, a flare could be seen flying through the air and hitting the side of the open-air Sky Sports studio.

While Dave Jones hosted proceedings, Graeme Souness, Roy Keane and Micah Richards had all stepped away from the box as their awaited the 16:30 kick-off.

Following the initial scenes, Sky Sports broadcasted pictures that show the pitch clear of fans, while some debris including rubbish remained.

They reported that those who had gained access left in an orderly fashion, and that the Premier League were ready to go ahead as normal.

Despite an apology from Joel Glazer following his failed European Super League plans, discontent regarding the current owners has been going on for years.

Ole Gunnar Solskjaer said of the potential scenes earlier in the week: "It's important that the fans' views are listened to and we communicate better.

"My job is to focus on the football side and that we have the best possible team.

"As I've said before, I've been backed, I've had great support from the club and the owners and I'm sure I will get the backing again to go one step further.

"But I'm so happy all the clubs have agreed that this shouldn't be the way of moving forward. Then again, when the protests are on, it's important they go in a good fashion and that we keep it peaceful.

"The players are focused on the game and nothing else. They've handled difficult situations before. Of course, it was a strange week before the Leeds game after the Super League announcement.

"But I've got to say I'm not worried one second that our mind is not on the football when it happens. I think you saw here in the semi that the players are fully focused on performing."