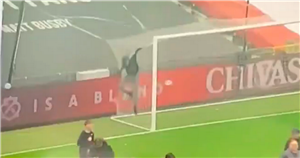 One Manchester United fan was sent flying after a stray ball hit the net that he was sitting on during a pitch invasion of Old Trafford.

It comes as the match against Liverpool was postponed amid shocking scenes at the club, in and around the stadium.

Over 200 supporters broke into the ground and invaded the pitch as many more demonstrated outside and next to the team hotel at Lowry.

There has been a simmering unease with the owners at United with fans not happy with the Glazers.

But it came to a head after news broke that they, along with five other Premier League clubs, were looking to break away and form their own competition called the European Super League. This appears to have been the catalyst that has sparked outright chaos.

And as fans stormed the pitch at Old Trafford, one supporter might be waking up tomorrow morning with a few bumps and bruises.

As a young male sat on top of the goalposts on the netting, someone else saw a ball and saw their chance of glory at the Theatre of Dreams.

A shot was rifled into the bottom corner which sent the fan on the net flying.

The incident was well-documented by Sky Sports, who had been in position to broadcast the match only for proceedings to suddenly change. Pundit Gary Neville has been particularly vocal over the state of his former club and did not hold back on live television.

Speaking on Sky Sports from Old Trafford, the United hero said: “Today there is anger, I would hope tomorrow it switches to mobilisation and reform, regulation and behind a fan-led review.

“I might be a bit naive here, but when I spoke two weeks ago about these football clubs, Manchester United and Liverpool, they should act like the Grandfather of English football, demonstrating compassion, spreading their wealth through the family, their experience and being fair.

“They haven’t done, they’ve demonstrated self-greed and tried to walk away with all the money themselves and left their family struggling below."