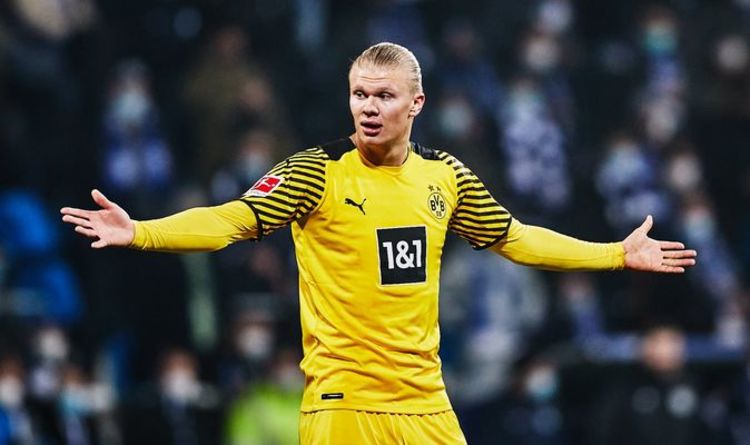 Manchester United have discovered the eye-watering cost of bringing Erling Haaland to Old Trafford, with the Red Devils forced to pay a mammoth fee to Mino Raiola if they are to complete a deal. Haaland is set to be one of the most in-demand players on the market in the summer transfer window.

The Norwegian has starred for Borussia Dortmund since joining them two years ago, developing into one of the world’s best strikers.

Haaland has made his mark in Dortmund in some style, scoring 76 goals in 79 games, which works out as a goal every 81 minutes.

Despite suffering a hip injury that ruled him out for 10 matches across all competitions, the 21-year-old has already scored 19 goals this season.

That astonishing form has attracted the interest of a range of top European clubs, including United, Paris Saint-Germain and Manchester City.

There is set to be a huge transfer battle for the striker at the end of the season when a £75million release clause is activated.

While that release clause is set at £62m, it will likely take far more than that for the eventual winner to fend off interest from Haaland’s other suitors.

Aside from the transfer fee, the true cost of signing Haaland is likely to be an eye-watering one, with his agent Raiola sure to get as much as possible in terms of wages and bonuses.

This cost has been worked out by French newspaper L’Equipe, who predict that the successful buyer of Haaland will have to set aside a fund of £250m to complete the deal.

Dortmund have offered Haaland an improved contract, with that deal offering an insight into his potential wage demands.

The Black and Yellow are ready to make Haaland their highest-paid player, with an annual wage of £13.3m.

But according to L’Equipe, any buyer will have to set aside £25m to £30m for Haaland’s annual wage over a six-year deal.

That fee is not all though, with Haaland’s representatives, his agent Raiola and father Alf-Inge, also due commission for their work in any transfer.

It is stated that both can expect to receive in the region of £17m in commission, an astonishing fee considering United’s previous entanglements with Raiola.

When added with the release clause in Haaland’s contract, United will have to set aside at least £250m to get their man.

The Red Devils have experience of dealing with Raiola, with another of his clients already at the club in the form of Paul Pogba.

While there have been several run-ins between the super-agent and United, for a player with the generational talent of Haaland the animosity will have to be set aside.

As a result of that ability, any deal to bring in Haaland will likely be one of the most expensive in English football.