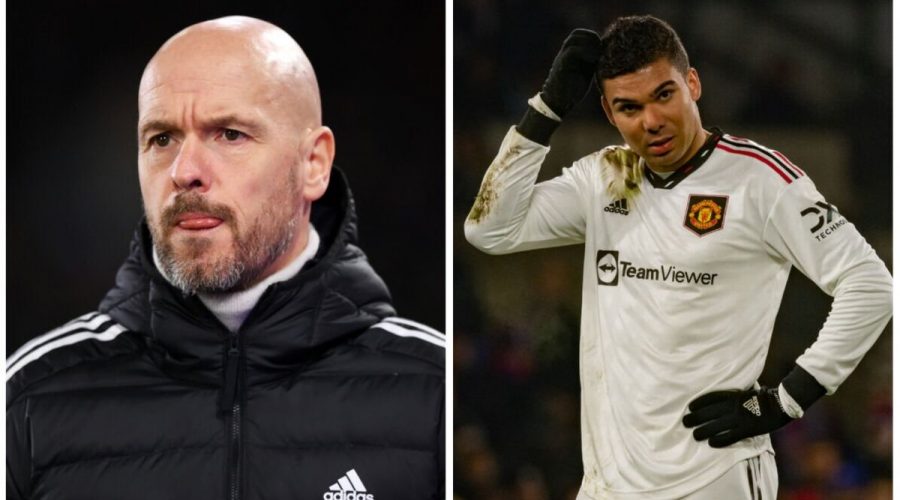 Manchester United were held to an agonising draw at Crystal Palace on Wednesday night thanks to Michael Olise’s last-gasp free-kick. Red Devils boss Erik ten Hag may look towards his next match against Arsenal with an extra tinge of concern due to Casemiro’s lapse in concentration, although stand-in right-back Aaron Wan-Bissaka did give him a performance to smile about…

The Red Devils missed their chance to apply pressure on Arsenal by coming away from south London with the three points, and the Gunners were dealt a major boost in the process. With their Premier League meeting scheduled for Sunday, Casemiro won’t be on the pitch after picking up a yellow card at Selhurst Park that will see him suspended.

The Brazilian grew into the game in the second half and began to dictate play, but his slack moment prompted a booking and a shake of the head from Ten Hag as he faces the prospect of playing the table-toppers without one of his key men.

Leading up to the January transfer window, rumours suggested that Ten Hag would look to axe Wan-Bissaka and bring in a right-back of his own choosing. The 25-year-old’s performances over the past few weeks, however, suggest that the Dutchman has no choice but to keep him around.

Since being forced to deputise for first-choice Diogo Dalot, Wan-Bissaka’s touch, passing and sense of adventure have gone through the roof for the Red Devils. Wednesday night at Selhurst Park was one of the finest examples of that as the full-back linked well with Antony, wriggled out of tight spaces and persistently bombed down the right flank, and his last-ditch sliding tackle in stoppage time may just have prevented an all-out disaster.

It has been a rollercoaster 12 months for Wout Weghorst who, this time last year, was still two weeks away from signing for Burnley. Since then has has suffered Premier League relegation, rediscovered his goal-scoring form at Besiktas and sealed a complicated loan move to Old Trafford until the end of the season.

Ten Hag chose the rangy frontman to start against Palace and his hold-up play gave United an entirely different dimension. A towering 6ft 6in tall with decent technical ability and a respectable strike rate, Weghorst didn’t manage to get on the scoresheet but still gave supporters plenty of encouragement on his debut.

Crystal Palace boss Patrick Vieira drastically shuffled the pack on Wednesday after coming into the match on a three-match losing streak. Joachim Andersen, Jeffrey Schlupp, Ebere Eze and Jordan Ayew all dropped out from the XI that started against Chelsea last time out.

Usual suspects Marc Guehi and Cheick Doucoure were solid for the hosts but it took until the 90th minute to confirm that Vieira’s drastic action had paid dividends, with Olise producing a moment of free-kick magic.