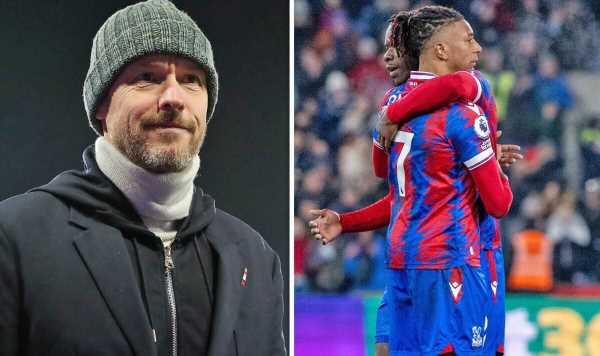 Manchester United boss Erik ten Hag has revealed he told his players to put their 1-1 draw with Crystal Palace behind them following the game at Selhurst Park. The Red Devils had gone into the fixture hoping to continue their charge towards the Premier League title. However, that didn’t happen with Michael Olise cancelling out a first half strike from Bruno Fernandes to peg the resurgent side back.

United had entered their match with Palace on a high after a stirring 2-1 victory over fierce rivals Manchester City last time out.

But the Red Devils were unable to build on that victory, instead slipping to a draw after Olise cancelled out a fine strike from Fernandes.

It means United are now eight points behind Arsenal having played a game more – and defeat at the Emirates Stadium on Sunday would be catastrophic as they seek a first league title since 2013.

Yet Ten Hag has revealed he’s told his United players to forget all about the match at Selhurst Park and to now switch their focus to Mikel Arteta’s high-flying out instead.

“It’s happened, you can’t change this any more,” he said. “I just said in the dressing room: we’re looking forward.

“Get energy, look to Arsenal and we will make a proper plan. [The] players have to make sure they are ready for that game because it’s a top game and it’s fantastic to play such games, so we are looking forward.”

David De Gea made a fine save to keep United ahead before Olise struck to give the hosts a point.

And Ten Hag hailed the Spain international after the game by saying: “A great save. I think that was the only chance Crystal Palace produced.

“I think we had a couple of good opportunities and we scored a great goal. In the second half, I think it was the same: we had control of the game, but I think we have to invest more for the second.

“If you then score [for] 2-0, the game is over. Now you get hammered with an unlucky moment in the end.

“If you concede a goal two minutes, or one minute, before [the end], then it’s difficult to react, though we had a chance to score for 2-1 with Casemiro.

“But that’s what it is and we have to take the lesson. [We needed to] invest more for the second goal.”

Another blow for United was Casemiro’s yellow card, with the Brazil international now primed to miss the game with Arsenal on Sunday.

And Ten Hag reacted to that development by saying: “I think it’s what you say: it’s instinctive.

“He went for the ball, I think he missed the ball but it’s quite clear it was also a situation on our right side that could have been a dangerous situation.

“He wants to stop it himself and that was his reaction. It’s quite clear.

“As I’ve said, if we invest more for the second goal then you don’t come into such situations. Last time we beat Arsenal without Casemiro, so this time we have to do the same.”

“I think we deserved the point,” said the former Arsenal star, who has now boosted his old side’s title chances.

“Really challenging against a really good side. We found it difficult to close them down but we managed to stay in the game.

“In the last 15 minutes we put pressure on them. Michael scored that free-kick. It was tough, we worked hard and we got rewarded.

“I saw organisation, really good team spirit, communication. We kept our discipline and that helped us stay in the game.

“We had that Wilfried [Zaha] run at the end. If it was a different player [than Aaron Wan-Bissaka] he wouldn’t catch him.

“That was a tough game against a good side. We needed luck to stay in the game, but we provoked that luck.”