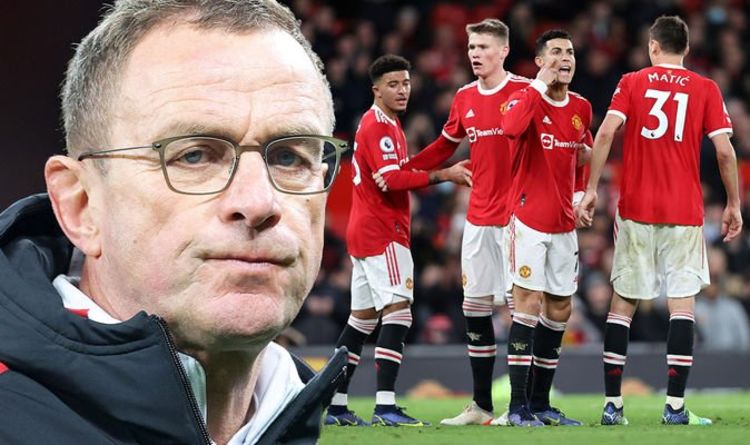 Ralf Rangnick says Manchester United players are not putting in the physical effort required to be a top team in the Premier League. The interim manager delivered the withering assessment on the evidence of his nine games in charge and ahead of tonight’s FA Cup third-round visit of Aston Villa.

And not only does he believe United players need to up their game to catch the likes of Manchester City, Rangnick believes there are plenty of teams below them putting in bigger shifts.

“This is the only way we can compete in this league and at that level,” said Rangnick who wants his players to work harder out of possession.

“This is what we have to do. We have to develop into this kind of team.

“I said after the first game against Crystal Palace, we showed at least in the first half a lot of those things and it’s about implementing this into the team in a sustainable way.

“This is our job and we have to do it together with the players and we have, obviously, to develop the players, identify for each game, the players who are willing and able to do that and to deliver.”

Rangnick insists United’s players have the capability to implement his high pressing style and believes he is getting his message across in team meetings.

“The team is able to dominate games, to win games. Both games against Burnley and Palace that was the case and this is exactly what we have to achieve in the next weeks to help the team develop into a dominating team.

“This can only be done in possession and out of possession they do things together.”

Rangnick is battling to unite a dressing room which he admits contains a number of players unhappy with their current playing situation and others who are looking for a way out of club either in January or in the summer.

Yet he has been handed a boost after Edinson Cavani confirmed he has no intention of moving before his contract is up in the summer.

“Edi told me that I can rely on him to stay until the end of the season and give his very best and be a role model for the young players,” said Rangnick.

“If he plays from the start, he’s available and he’s happy to play. But even if he’s not playing, he will be trying to be the best possible role model for the other players.

“It is good news because Edi if one of those players with his vast amount of experience, with his mentality, his work ethic, I think he could really be a perfect role model for the other players.”