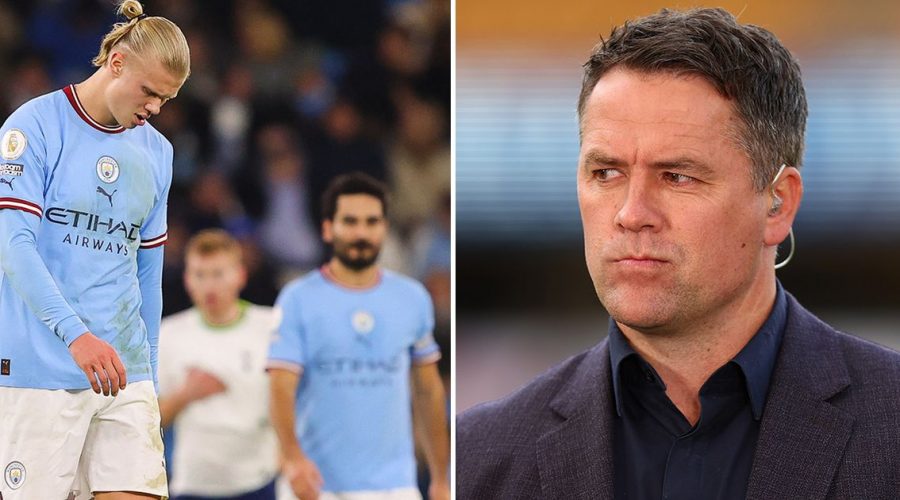 Ex-England striker Michael Owen has taken aim at Manchester City fans for a 'staggering' lack of support for their team.

Pep Guardiola's side the left field to a chorus of boos at the midway point of their Premier League clash against Tottenham Hotspur, having conceded two goals in a matter of minutes. Capitalising on two blunders from Ederson, Dejan Kulusevski rolled home to hand Spurs the lead at the Etihad Stadium before Emerson Royal headed in another in the second minute of added time.

City fans voiced their discontent with snorts and jeers as the home side returned to the dressing room but they were made to look rather silly in the second period as Guardiola's men turned the game on its head to claim a 4-2 victory.

BT Sport pundit Michael Owen was quick to put the boot in, blasting Man City fans for a lack of belief on Twitter. "And to think the City fans booed their team off at half-time," harked the former Liverpool and Manchester United striker.

"Winners of 4 of the last 5 Premier League titles. Sitting 2nd in the league and through to The Champions League knockout stages. Arguably the best club team in the world right now. Staggering."

HAVE YOUR SAY! Can Man City beat Arsenal to the Premier League title? Let us know in the comments section.

Though it wasn't just former players from the red half of Manchester that took issue with the jeers. Ex-Man City defender Micah Richards was quick to brandish the booing as "unacceptable" when analysing the game for Sky Sports.

Three goals in 12 minutes inspired a quick-fire turnaround for the champions at the Etihad Stadium as Tottenham wilted under the intense pressure of City's continuous persistence. Goals from Julian Alvarez and Erling Haaland had the hosts level by the 53rd minute with Riyad Mahrez adding a third shortly after the hour mark.

Mahrez, who scooped up the Man of the Match award for tying Tottenham in knots, rounded off the scoring in the final minute of normal town, dinking the ball over Hugo Lloris.