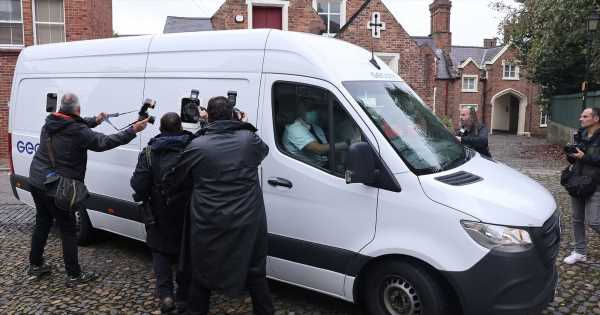 Manchester City footballer Benjamin Mendy has had a trial date set for his charges of rape and sexual assault.

Mendy, 27, was charged with four counts of rape and one count of sexual assault last month.

Three of the rapes are alleged to have taken place in October 2020 and he is accused of sexually assaulting a woman in early January this year.

He is also charged with raping a woman last month.

No pleas were entered when he entered the dock at Chester Crown Court on Friday. A further plea trial and preparation has been set for November 15.

Mendy will remain remanded in custody until then.

A trial date has been set for January 24, 2022. The trial is expected to last around two-and-a-half weeks.

Mendy appeared in the dock wearing a beige jumper and tracksuit bottoms.

The French defender was denied bail last month and has been remanded in HMP Altcourse in Liverpool since then.

A second man has also been charged as part of the inquiry into allegations of rape against Mendy.

Matturie appeared in the dock wearing a grey jumper and tracksuit bottoms.

The charges relate to three complainants over the age of 16 and are alleged to have taken place between April 2021 and August 2021.

In a statement, the club said: "Manchester City can confirm that following his being charged by police today, Benjamin Mendy has been suspended pending an investigation.

"The matter is subject to a legal process and the club is therefore unable to make further comment until that process is complete."