Manchester City will win the Premier League title this season because Liverpool have not recruited enough this summer, according to Rangers legend Ally McCoist. Liverpool finished 18 points above City last term to win their first title in 30 years. But Jurgen Klopp has, so far, not added any major additions to his first-team squad.

Liverpool have signed Greek left-back Kostas Tsimikas for just under £12million but the 24-year-old is only set to be a back-up option to Andy Robertson.

City, meanwhile, have spent over £60m on Ferran Torres and Nathan Ake, and are heavily linked with a move for Napoli defender Kalidou Koulibaly.

McCoist believes there is big pressure on City this season to win back the title they lost so comprehensively to Liverpool.

And the Scot reckons Pep Guardiola’s side will be able to deal with the pressure and overcome Klopp’s reigning champions.

JUST IN: Arsenal boss Mikel Arteta may be about to sign his own Aaron Ramsey 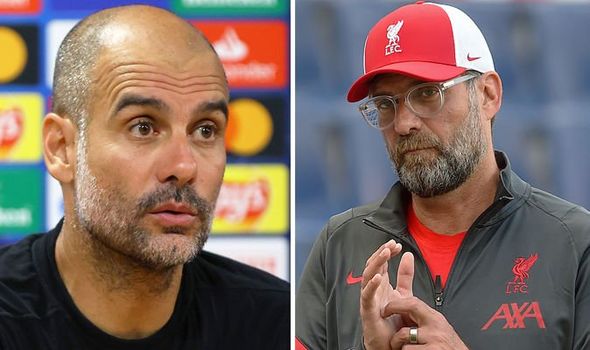 “I think next season there’ll be a level of pressure on, particularly Guardiola, but also Manchester City that they haven’t been used to in recent years,” McCoist said on talkSPORT.

“I think the gap, as massive as it was [last season], a lot of it was down to the fact Liverpool were brilliant but Man City wanted to concentrate their efforts on the Champions League, which ended up as disappointment.

“I think there will be a real scrutiny this season coming on Guardiola that hasn’t been there before.

“There’s no doubting his ability as a coach, he’s absolutely superb, but I just think the pressure will be great on them this year.

“But, I think they’ll be able to handle it, and that’s basically my only reason, my main reason, for having them as favourites [for the title].

“I’d like to have seen Liverpool strengthen, because apart from [Tsimikas], they haven’t dabbled in the market at all, and I think City won’t be finished yet.”

“Manchester City yeah, I think they’ll strengthen again, so I think they are the best team,” Bent said on talkSPORT.

“I think Chelsea, with all the players they’ve brought in, I think they’re just going to find a way of getting it done. So I think they will finish second.

“Liverpool haven’t strengthened enough and their players look knackered to me, what I’ve seen of them so far, so I think they will finish third.

“I think Manchester United will just pip the rest to fourth, yeah.”