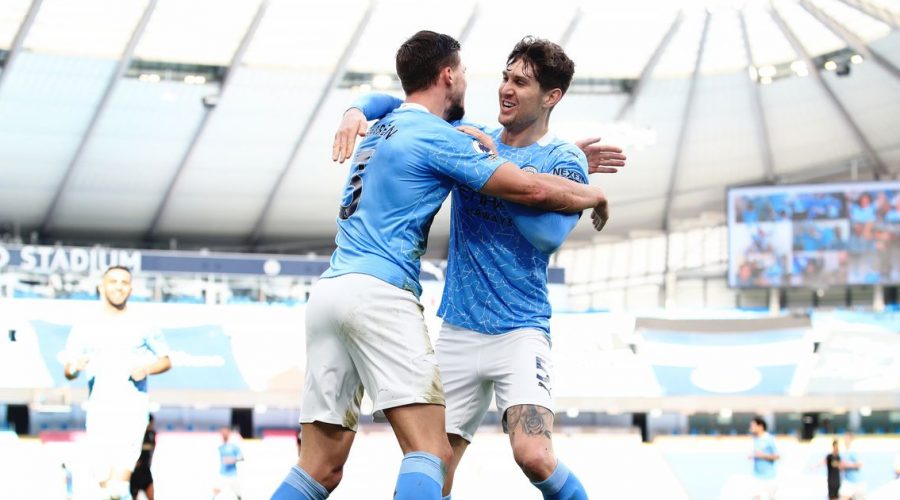 Manchester United have the odds firmly stacked against them in this weekend's derby.

They travel to an inform Manchester City side who have recorded 21 straights win as they look poised to regain their title.

The two sides drew 0-0 in the reverse fixture earlier this season and met in the semi-final of the Carabao Cup.

City won 2-0 on that occasion and have continued to go from strength to strength.

Pep Guardiola's players are brimming with confidence while Ole Gunnar Solskjaer is looking to reinvigorate a team that has lost its sparkle in recent weeks.

There will be no shortage of star quality on display – even with the absence of Paul Pogba and David de Gea.

With that in mind we pick our combined XI from City and United.

Dean Henderson may well have a shout when it comes to this position in years to come, but in the here and now there's only one winner.

Solskjaer claimed last season that De Gea was the best keeper in the world, when in all honesty, he's not even the best goalkeeper in his city.

Ederson's impact on this team tends to go unnoticed simply because we've become so accustomed to it.

But the consistency shouldn't deter from his quality and the Brazilian remains a standout in this department.

There will be some at the Etihad who have the Portuguese star as a potential club Player of the Year.

He's certainly the most improved player in Guardiola's squad having taken a year to settle.

But Cancelo is now that full-back who comes inside to create an overload in midfield.

He does it so well that he could probably play in midfield but that doesn't take anything away from his ability as a natural defender.

The defender's arrival was the catalyst that revitalised this City side.

There might now be a debate as to who is the best centre-half in the Premier League.

It is easy to forget that Dias is just 23 because he looks as accomplished as a veteran defender in his prime.

City went 11 games without conceding a goal from open play during their winning run and much of that was down to the leadership shown by their summer signing.

Great players make those around them better and Stones has certainly benefitted from being alongside Dias.

But don't let that takeaway from just how brilliant the Englishman has been.

He looked down and out at City with a move away very much on the cards. Now he's a crucial cog in their success.

Keeping Aymeric Laporte out of the starting line-up – and our combined XI – is no mean feat.

Stones is, without a doubt, the best English centre-half in the country at present.

Shaw has slow been rebuilding his career at Old Trafford having been unable to regularly produce.

A broken leg back in 2015 massively hampered him and his development, but now he is vital to United's defence and their attack.

Left-back is the one area you could say City can comfortably improve and as a result Shaw gets into our team.

Rarely spectacular but am absolutely necessity.

The lack of a quality holding midfielder has certainly held United back and it'd be interesting to see how they'd fare with Rodri in their side.

He supplies the foundation that Fernandinho once did and, having been questioned in his debut year, continues to grow under Guardiola.

Scott McTominay, Fred and Nemanja Matic often battle for two spots at the base of the United midfield.

So when you consider that City need one man to do a job that United require two for you begin to realise his class.

This is where it gets complicated – those in front of the defensive midfielder.

It is not as if we could leave the potential PFA Player of the Year out though. The German has done several jobs in his City career.

He's always been comfortable on the ball at the base of midfield, but few could've anticipated he could play as well as a No 10.

Gundogan stepped up and scored ten times in as many games during City's winning run.

The 30-year-old is, when you consider his fee and exploits since, the most underrated signing since the takeover.

Fernandes is one of the few men who can deny Gundogan the individual gong.

He has, at times, carried a United side that sat top back in January.

They have fallen away since but the playmaker's form has largely remained. Yes there are accusations that he doesn't turn it on for the big games.

But his success otherwise overcompensates for that.

Only Mohamed Salah has scored more than the 26-year-old, but his goal involvements is only matched by Harry Kane.

The Premier League's best player is capable of fitting in anywhere. More effective from a central role, but being pushed slightly wider is unlikely to dampen his brilliance.

City's fluid system has shown that attackers under Guardiola are capable of filling gaps and utilising space left by others.

De Bruyne is technically brilliant, but his football brain is one of his greatest qualities and he would compliment any team in almost any position.

Yes the Algerian has been picked over Raheem Sterling, but there is little between them.

Sterling's goal output often sees him get the nod, but as an all round player I think Mahrez offers that little bit more.

The 30-year-old is just as effective coming inside or drifting out wide. He's one of those players who is predictable, yet almost unstoppable.

So few of United's attackers are firing right now and City have shown that they don't need a forward to win the title.

As a result Bernardo has got the nod as a false nine.

Guardiola's players have shown that their possession-based game suits the lack of a central figure and Fernandes would also have no problem fitting into such a system.

Bernardo is that 8/10 player on a weekly basis. He is comfortable with the ball in tight spaces, rarely gives away possession, can link play excellently and will run tirelessly.

March 5, 2021 Soccer Comments Off on Man City stars make up nine of combined XI with Man Utd ahead of crunch derby
NFL News