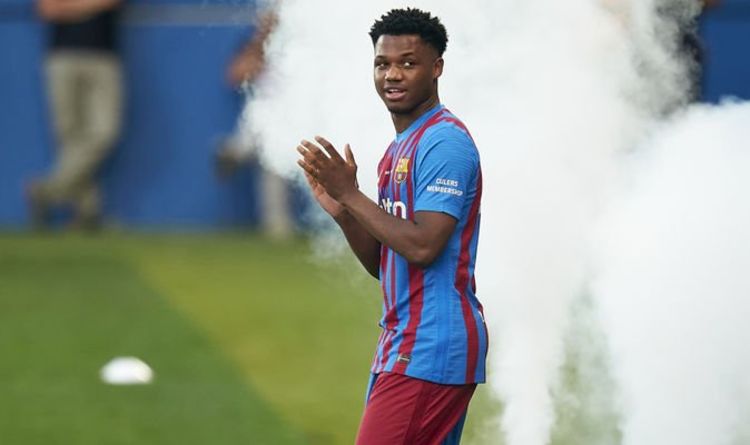 Manchester City have apparently been offered Barcelona wonderkid Ansu Fati. The Catalan giants currently find themselves in a horrendous financial situation and the player’s agent is reportedly touting his client to Europe’s powerhouses.

Fati is regarded as one of the most talented youngsters in world football and has already made 43 appearances for Barca at the age of 18.

The winger was even handed the number 10 shirt earlier this summer after Barcelona were forced to allow legendary forward Lionel Messi to exit the club.

Fati is represented by Jorge Mendes and, according to The Sun, the agent has been in conversations with other clubs in order to force Barca to offer the player an improved contract at the Nou Camp.

Despite their money troubles, there will be huge pressure on Barca to secure the future of their starlet or risk losing a player who could well be the man to take on the mantle left by Messi.

Fati would no doubt become a star in the Premier League, but City boss Pep Guardiola will reportedly help his former club by instructing the Citizens’ director of football Txiki Begiristain not to enter into discussions with Mendes.

Guardiola came through the Barcelona youth system and spent nearly 15 years with the club as a player.

Following his retirement, the 50-year-old enjoyed a trophy-laden four-year spell in charge of Barca, where he won the Champions League twice and La Liga three times.

Fati first broke into the Barcelona team as a 16-year-old in August 2019 and racked up seven goals in 24 La Liga appearances during his debut campaign.

He was rewarded with a call-up to the Spain squad for their UEFA Nations League clashes last summer and has gone on to win four caps for his country.

He began last season in outstanding form as he grabbed a brace in a 4-0 victory over Villarreal on the opening day of the season.

The youngster struck four goals in his first seven league games but was struck down with a serious knee injury in November and missed the rest of the campaign.

Fati is still sidelined and it is unclear when he will return to first-team action.

Barcelona, meanwhile, have started the new season well and are one of six clubs to have picked up two wins and a draw in their opening three games.

And club chiefs will be hoping the Catalonians at least have something to cheer about on the pitch this season.

The club appeared to be looking over the precipice earlier this year after president Joan Laporta revealed that they were £1.15billion in debt.