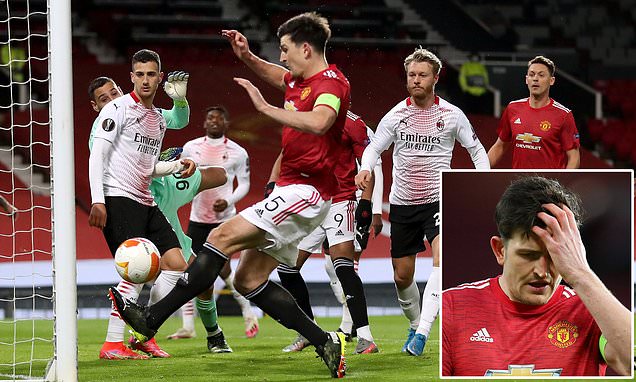 ‘That’s why I’m not a forward!’ Harry Maguire admits he ‘should have scored’ after glaring first-half miss from a YARD out against AC Milan… and Manchester United captain insists conceding last-minute equaliser was ‘really poor’ in Europa League

Manchester United captain Harry Maguire made ‘no excuses’ after his shocking first-half miss in the draw against AC Milan on Thursday night.

The centre back failed to convert from point blank range at the back post, slamming the ball into the post off his left shin pad before it ballooned behind in the Europa League last-16 first-leg.

Maguire’s face afterwards told the story and after his side conceded a late equaliser to Simon Kjaer – following teenager Amad Diallo’s first goal for the club which had brilliantly given Utd the lead in the second-half – the 28-year-old admitted he has ‘got to score’ those sort of chances. 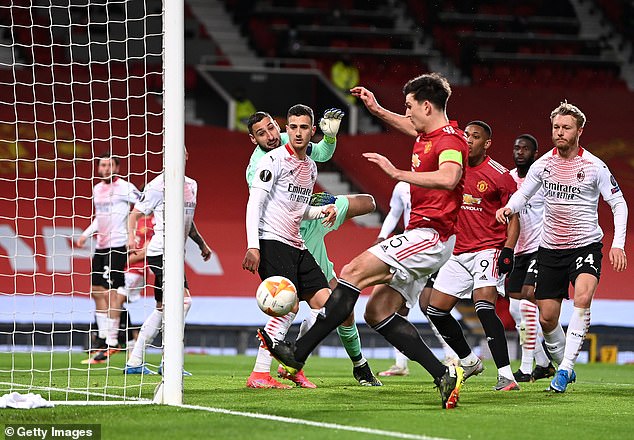 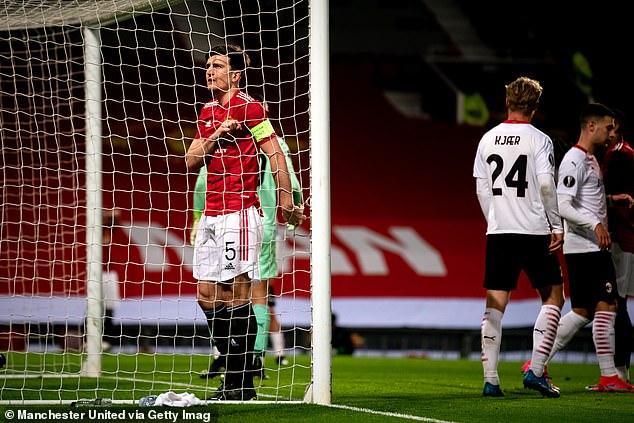 The Manchester United captain ‘made no excuses’ afterwards, admitting he has ‘got to score’

‘That’s why I am a defender and not a forward! But no excuses I have got to score.’

Fans were aghast after Maguire’s miss on Thursday night, with one saying ‘How is it even possible to miss that?’

Maguire added that United ‘need to play better’ in the second-leg at the San Siro next week after a largely underwhelming performance at Old Trafford.

‘It is disappointing to concede in the last minute, especially at a set-play when we didn’t play well, we didn’t play at our best but were comfortable in the game,’ Maguire added. 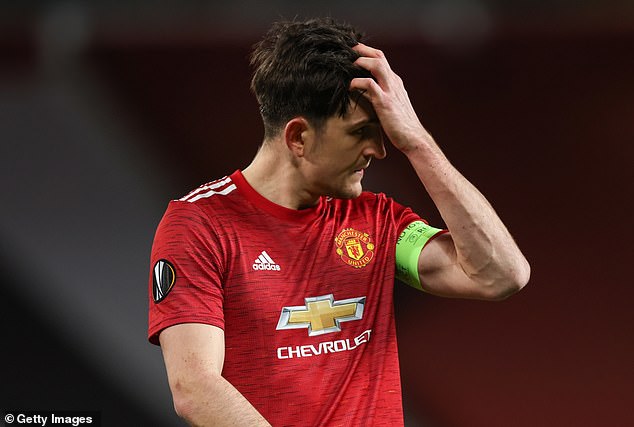 ‘They had a lot of possession after we scored the first goal but they didn’t create chances and it looked like we were going to see it out 1-0 and to concede the way we did, is really poor.

‘We need to play better [in Italy] that what we have done tonight. I felt we did enough to win 1-0 although they probably had the majority of the game but we had the best chances of the game.

‘But we need to play better and we know we can play better. It is going to be an exciting tie next Thursday and an important one for us. We have got to go there and play a lot better than we did tonight and we can go through.’

March 12, 2021 Soccer Comments Off on Maguire admits he 'should have scored' after glaring miss vs AC Milan
NFL News