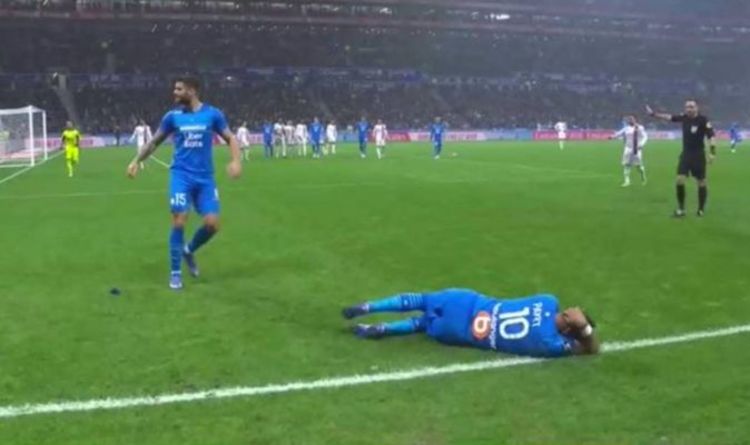 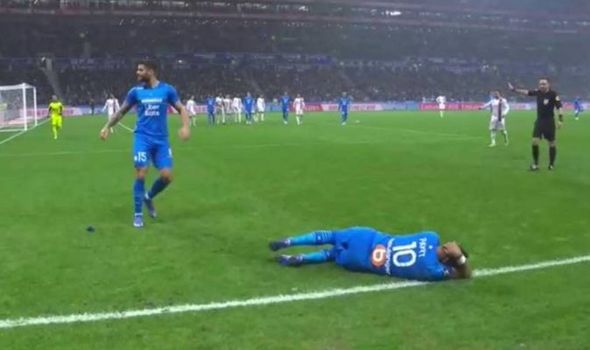 Marseille star Dimitri Payet was hit with a water bottle from opposition fans leading to the match in Lyon being suspended. The Ligue 1 season has been marred by controversy this year with a number of off-field issues.

Marseille were at the centre of a mass brawl earlier this season when hundreds of Nice fans raced onto the pitch back in August.

In the second half, Payet was getting ready to take a corner before he was hit by a projectile from Nice fans.

The former West Ham star got up and reacted furiously before being held back by some of his team-mates.

Chaos ensued as dozens of home supporters made their way down from the stands with stewards struggling to keep them at bay.

And hundreds of supporters soon broke through the barriers to race onto the pitch and confront the players in scary scenes.

Payet has now fallen victim to another attack from opposition fans in Marseille’s match against Lyon.

The game had barely gotten underway when Payet prepared to take a corner in the fourth minute.

Payet was then spotted on the deck with replays clearly showing a bottle had hit him in the head.

Stay up to date with all the big headines, pictures, analysis, opinion and video on the stories that matter to you.

November 21, 2021 Soccer Comments Off on Lyon vs Marseille suspended after Dimitri Payet hit with bottle for second time in months
NFL News