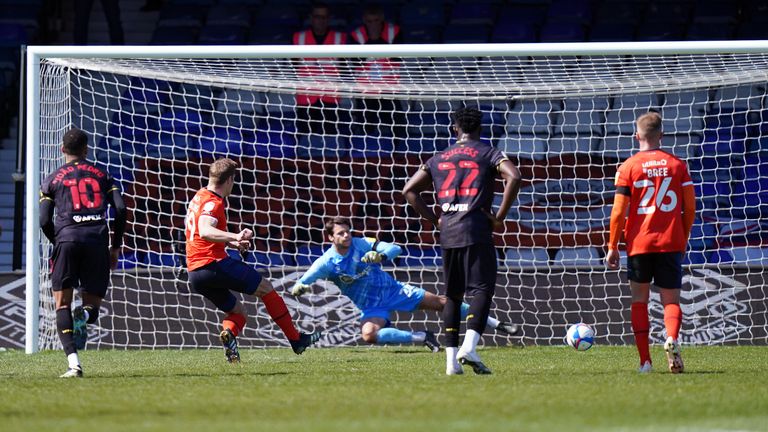 Luton striker James Collins came off the bench to score with his first touch as the Hatters beat arch rivals Watford at Kenilworth Road for the first time since 1993.

The Hatters, who were the better side for long periods, were awarded a penalty with 18 minutes to go, as Collins came off the bench to send keeper Daniel Bachmann the wrong way and net the only goal of the game.

The result dealt Watford’s automatic promotion hopes a blow, but Swansea and Brentford could only draw in the chase to win promotion behind Norwich.

Luton made a promising start to their first home derby since 2006, Elijah Adebayo’s downward header met by Luke Berry whose twisting volley was easy for Bachmann.

Town captain Sonny Bradley also curled over from just outside the box, before Kiernan Dewsbury-Hall saw his shot deflected behind, and then Bradley put a header over the top under pressure from close range following James Bree’s excellent corner.

Will Hughes had Watford’s only attempt of the opening half hour, rifling over the bar, while Berry couldn’t beat Bachmann at his near post after meeting Bree’s cross.

Pelly-Ruddock Mpanzu blasted a fine chance into the empty stands from eight yards after Watford couldn’t clear their lines.

Dewsbury-Hall then went for the top corner from range, narrowly missing, as after the break the action slowed somewhat, with Watford starting belatedly up the tempo. Hughes missed his kick from a decent position, Matty Pearson making a good block too.

Adebayo couldn’t find the target from Dewsbury-Hall’s free kick, as Tom Cleverley came on to send a shot wide for the visitors.

Adebayo latched on to an underhit backpass after 72 minutes and was bundled over just inside the box by keeper Bachmann.

The forward was injured in the challenge though and Collins came off the bench to step up with his first touch and roll the ball into the net to make it 1-0.

Hughes sliced wide for the Hornets, who were then reduced to 10 men with two minutes remaining, full back Kiko Femenia sent off for his second booking after pushing Kazenga LuaLua over as he chased a ball forward.

In stoppage time, Watford thought they had a leveller, ex-Hatter Andre Gray bundling the ball over the line from a corner, only for an offside flag to cut short his celebration as the Hatters held on for a famous win. 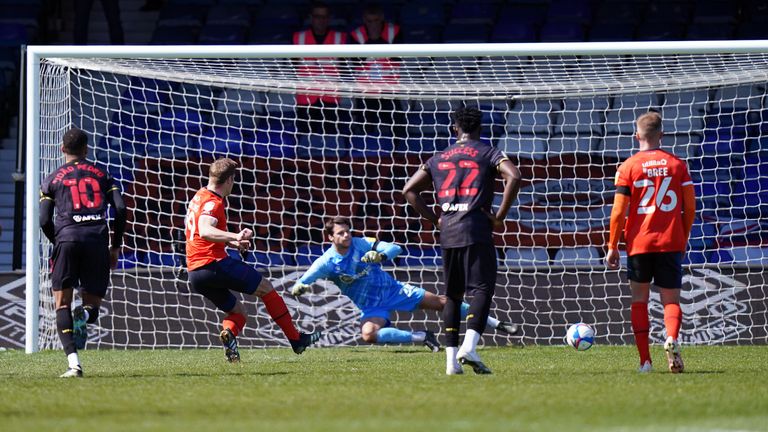