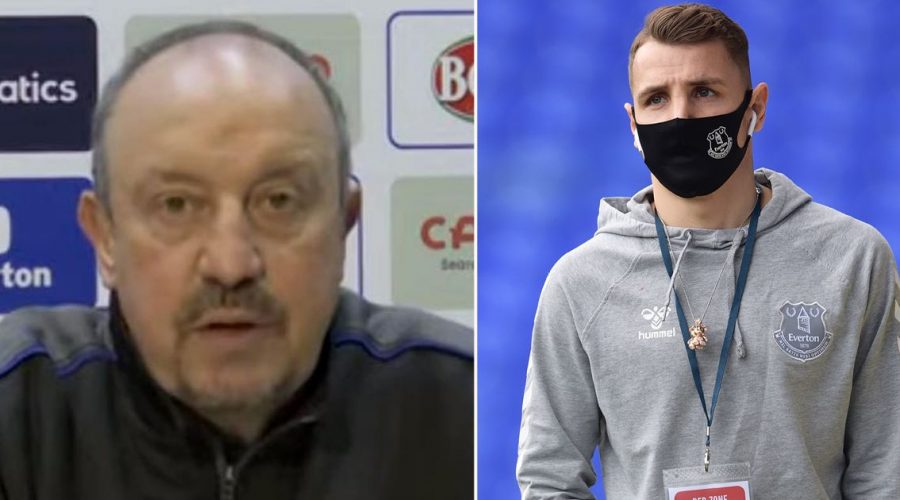 Everton boss Rafa Benitez fired several shots towards Lucas Digne after revealing the defender had put in a transfer request.

Digne, 28, has been linked with a move away from Goodison Park after reports emerged that he had fallen out with the Toffees manager.

His availability has caught the attention of several Premier League sides who are looking for a new left-back in the January transfer window.

Chelsea, West Ham and Newcastle have all registered an interest in the France international.

Naturally, Benitez was questioned about Digne in his FA Cup pre-match press conference – and he didn't hold back with his answers.

“I had a couple of conversations with him," Benitez begun. "What do you expect the manager to do when the player says he doesn’t want to be here?

"I think he was very clear. I want to ask a question to any fan or former player, what Peter Reid will say if a player doesn't want to be here? He told me what he thought, so what do you expect the manager to do?

"I have no explanation [for why he wants to leave]. If someone is happy or not happy, you are paid big money and have to perform.

Will Digne be a miss for Everton? Let us know in the comments section.

"Modern football, maybe the stats and the priorities have changed and maybe people think about themselves before the team.

"Do we want to grow and improve or just to manage the egos?"

Newcastle, who are moving quickly in the market, were said to have put in a player-plus-cash bid involving Sean Longstaff for Digne.

However, he turned down the move as he doesn't fancy joining Eddie Howe at St James' Park.

When asked about further interest, Bentiez sarcastically replied: "I will say to you I'd like to sign Haaland and Mbappe. You can make an inquiry, we need commitments. People can talk and talk.

"We knew already, we were trying to manage the situation. We have interest but nothing concrete. What I cannot do is bring players who want to be here, and then give priority to those who aren't interested.

"We know Lucas is a good player. The question is what the team needs, and then we didn't have that. The team has to do something, every player has to be there for the task."

Everton have already signed replacement Vitaliy Mykolenko, but Benitez said if Digne cannot be sold then they will "have to deal with it" come January 31.