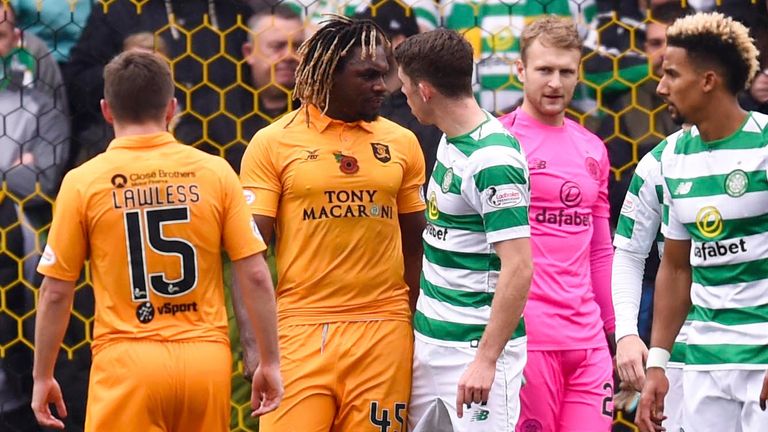 Celtic moved top of the Scottish Premiership for the first time this season despite being held to a 0-0 draw by a resolute Livingston on Sunday.

Brendan Rodgers’ side have still only conceded six league goals this season – the fewest in the division – while Livi have only conceded one more, so it was always likely to be a cagey affair at the Tony Macaroni Arena.

The hosts, who move up to seventh with the point, were fortunate not to be reduced to 10 men in the first half after Dolly Menga appeared to move his head into Ryan Christie, but referee Kevin Clancy did not spot the incident. Man of the match: Liam Kelly.

After Celtic’s exertions in the Europa League against RB Leipzig in midweek, there was always the possibility of there being a reaction against Gary Holt’s side, who were seeking a response following two league defeats.

Livi made a bright start, with Alan Lithgow’s long throws causing problems in the Celtic defence as Mikael Lustig was forced into a desperate block to deny Keaghan Jacobs before Sinclair headed wide from James Forrest’s cross.

Menga was then fortunate not to be sent off after he moved his head into Christie’s face, but the Angola international survived with just a warning.

Livingston made three changes from the defeat to Hamilton last weekend, with Bobby Burns, Keaghan Jacobs and Stevie Lawless back in from the start in place of Jack McMillan, Ricki Lamie and Craig Sibbald.

Kelly produced his first fine stop of the afternoon to deny Christie low to his right, with Scott Pittman blocking Rogic’s rebound.

The closest Livi came to breaking the deadlock before the interval was through two headers from Declan Gallagher, which were routinely tipped over by Scott Bain.

Bain was forced into action to divert Gallagher’s flick-on from another inviting Lithgow throw away from danger on the hour-mark, but it was Celtic who dominated the closing stages.

Kelly had to be at full stretch to tip Rogic’s shot over after Livingston failed to clear Callum McGregor’s corner with five minutes remaining and Sinclair then slashed his shot from Lustig’s cross horribly wide from close range.

Livingston take on Rangers at Ibrox on Saturday November 24. Celtic return to action following the international break by visiting Hamilton on the same day.