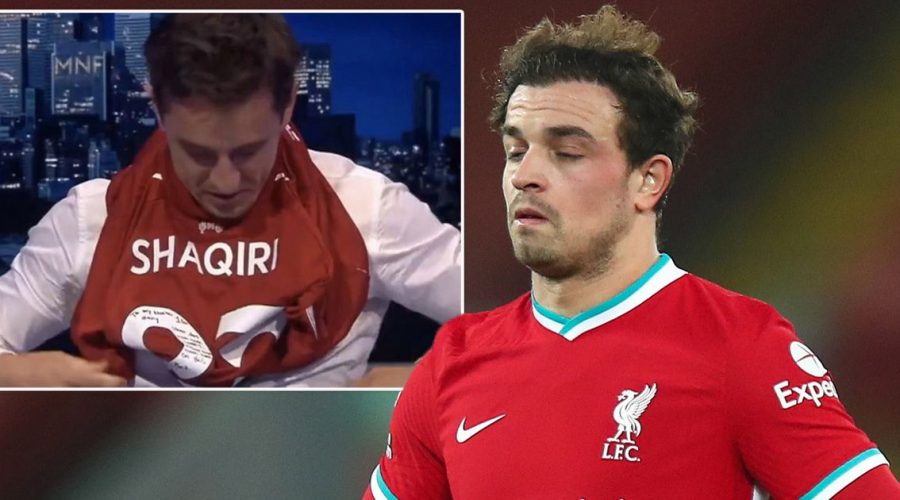 There was always the sense with Xherdan Shaqiri that he was going to be at Liverpool for a good time, not a long one.

And he certainly had that.

Now Shaqiri wasn't always on the scene when those trophies were won – in fact he rarely was – but he could always say that he played a part, from large to small.

Shaqiri hadn't started a game for over three months when he was thrown into the Champions League semi-final, second leg against Barcelona in May 2019, with Liverpool 3-0 down and shorn of injured pair Roberto Firmino and Mohamed Salah.

Everyone remembers the impact of Divock Origi, the other attacking understudy that night, but the Swiss was heavily involved as well, tearing around the pitch for 89 minutes and providing a pinpoint cross for Gini Wijnaldum to head home the third goal.

For Jurgen Klopp, Shaqiri's performance was the definitive proof that his approach to managing squads is the correct one.

The Liverpool boss has never wanted to work with big groups of players at Anfield, preferring instead to pick from a smaller core of performers who possess the base level of ability he wants.

The difficulty with that approach is of course that you risk alienating and frustrating the good players you keep on the fringes, with these players certainly not short of offers to go and be a first-choice pick elsewhere.

It is important, then, that these squad members don't kick up a fuss or make demands of the manager, something that many who pre-judged Shaqiri's character thought he might have done once he'd got frustrated.

But the Swiss has been happy with his squad role, as were the likes of Adam Lallana and Dejan Lovren before their departures, and Joel Matip and James Milner during their times out of the team. Origi has probably been a bit too happy, in truth.

Klopp's managerial genius can be found in keeping these players motivated, match-fit and ready to deliver whenever called upon, with Shaqiri's first season perhaps showing that was the pick of the bunch.

It was safe to say that Gary Neville was not a fan of the £13.5million deal Liverpool struck to sign Shaqiri from relegated Stoke City in the summer of 2018 – largely because that's what he said himself.

Liverpool had taken advantage of a release clause for a transfer outlay that was significantly dwarfed by the signings of Alisson, Fabinho and Naby Keita that summer, and Virgil van Dijk six months earlier.

Shaqiri's clear ability could be seen during his three years at Stoke after a fairly surprising arrival in 2015, but Neville didn't like what he saw as the Potters went down.

“I’m not a fan of Shaqiri to be honest with you," he'd said on punditry duties at the 2018 World Cup.

"I think that was, to be fair, made worse by the fact that he distanced himself from his team-mates as Stoke. They were unprofessional last season, Stoke. There’s no doubt, and he epitomised it.

“He could score the goal of the tournament and he could have the most amazing game.

“But he could also be there for three matches, do nothing and just amble and wobble around.

“To be honest with you, with him, players like that I can’t have. I struggle with it.”

Despite Neville's concerns though, Klopp was using Shaqiri fairly often upon his arrival.

It tends to be forgotten now but Liverpool would often play a 4-2-3-1 formation back then, with Shaqiri joining the famed front three often from the right as Salah started through the middle.

He'd also start his fair share of games on the bench too though, just as he did against Manchester United in a December 2018 clash at Anfield.

From there, he could perform a super-sub role.

With United looking to cling onto a point in what would prove to be Jose Mourinho's final match in charge, Shaqiri's added impetus from the bench changed the game.

He scored two goals, which made for an awkward moment for Neville after he'd previously been forced to wear Shaqiri's Liverpool shirt by punditry pal Jamie Carragher after losing a bet.

In terms of individual moments it would never really get any better for Shaqiri at Liverpool.

He would make just seven appearances in the title-winning season of 2019-20, with just five of those coming before the league was secured.

There was a goal against Everton in a rare start, but his lack of action led to fierce criticism in his homeland, where he was told he was "not a champion" by a well-known TV pundit as his preference to be a bit-part player at a big club and not a regular starter at a smaller one was slammed, largely because of the impact on the national team.

After that disappointing campaign he did feature more often in 2020-21, but that was such a mess of a Liverpool season that every possible plan seemed to have been exhausted.

Klopp has always valued Shaqiri – he started him in the draw with Manchester United in January, and he was often a go-to option from the bench – but the written has long been on the wall over his future.

After showing the world his quality at Euro 2020, where he scored three goals, a move surely now seems right for all parties as Liverpool look to freshen up their attacking options.

July 26, 2021 Soccer Comments Off on Liverpool’s Shaqiri "not a champion" but did manage to embarrass Gary Neville
NFL News