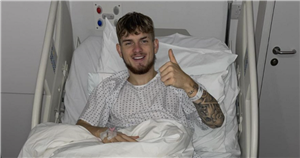 Liverpool midfielder Harvey Elliott bit back at a Manchester United supporter who mocked the dislocated ankle that he suffered during their recent win over Leeds.

The 18-year-old has undergone successful surgery on the gruesome injury, but looks set to miss the majority of the season having played a back-up role at the start of the campaign.

Although there has been plenty of sympathy for the youngster, one fan of rivals United decided to mock him for his spell on the sidelines, earning a response from the player himself.

With Elliott deciding to poke fun at their lack of silverware in recent years compared to their glory days, he may have slightly exaggerated their recent period without a trophy. The fan said on Elliott's TikTok video: "He's not walking like that anymore."

With Elliot replying: "Crazy though how I have more legs than United have trophies in the past 8 years."

However, in the last eight years United have won the FA Cup and Community Shield in 2016 under Louis van Gaal, as well as the League Cup and Europa League in 2017 under Jose Mourinho.

Does Pascal Struijk deserve his three-game ban? Give us your thoughts in the comments section.

That exchange came after Elliott sent a positive message to Pascal Struijk after Leeds lost their appeal against his red card and three-game ban.

Elliott said: “Sorry about this Pascal I think it’s wrong!

"But it’ll soon blow over brother and you’ll be back in no time smashing it again keep positive.”

After the 22-year-old had said: "In today’s game something happened that I would never wish on anyone Harvey Elliott, my thoughts are with you.

"I’m gutted and never meant for this to happen. I wish you a speedy recovery and hope to see you back on the pitch soon.”

Leeds said on Wednesday: "We can confirm that our appeal against Pascal Struijk’s red card has been unsuccessful.

"Pascal will miss our next three games against Newcastle United, Fulham (Carabao Cup) and West Ham United. We will make no further comment at this time."