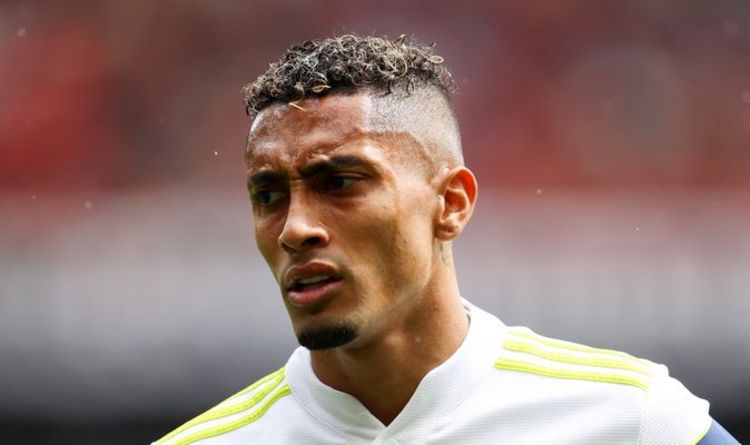 Liverpool have sensationally been warned against signing Leeds star Raphinha despite the Brazilian’s excellent Premier League form. The 24-year-old is highly sought after but Leeds have so far been able to keep their prized asset.

The Reds are one of the teams who have long been linked with Raphinha.

The winger has been one of the brightest players in the top-flight over the last 18 months.

Leeds signed Raphinha from Rennes for a bargain £16m in the summer of 2020 and he has already been reportedly valued far higher.

Liverpool and Manchester United have both been widely linked.

However, United legend Ferdinand has questioned why Liverpool would want the player given that they already have excellent options in attack.

JUST IN: Newcastle transfer target Witsel ‘set to say goodbye’ ahead of January

Mohamed Salah often occupies the right-wing position in which Raphinha plays for Leeds.

Ferdinand therefore wonders if the player would start frequently at Anfield.

“The only problem I think with something like Raphinha going to Liverpool is just where he’s going to play? He’s not going to start,” the ex-England defender said on his YouTube channel, Five.

“So, £60 million not to start is a big, big fee. And for him as a player, I’m sure he’ll have more options. It’s a great club, don’t get me wrong, going to be fighting on all fronts to win things.

“That question won’t be answered in a positive way for him: will I start a lot of games? If Salah stays and signs a new contract, it puts a dampener on his ability to play.”

Raphinha’s agent Deco has hit out at reports that his client could be available for as little as £26.9m.

“I think today he’s worth more than €32m (£26.9m). What will determine the price is the level of the club that signs him,” Deco told UOL.

“If it’s Manchester United, City, Liverpool, Chelsea, the price could reach around €60m (£50.6m). What determines the price of a player is the market he hits.”

Meanwhile Liverpool boss Jurgen Klopp has implied that the Reds will not be busy in the January transfer window.

That will likely rule out a transfer for another forward.

“We’re so happy, everybody was so happy for him (Minamino) that he scored the goal. The way he played today reflects how well he is training at the moment.

“He will have games, no doubt about that.”