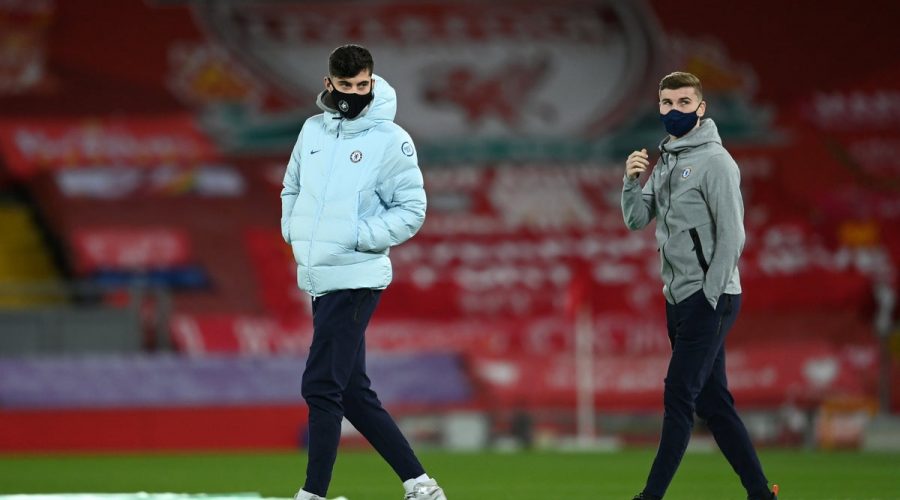 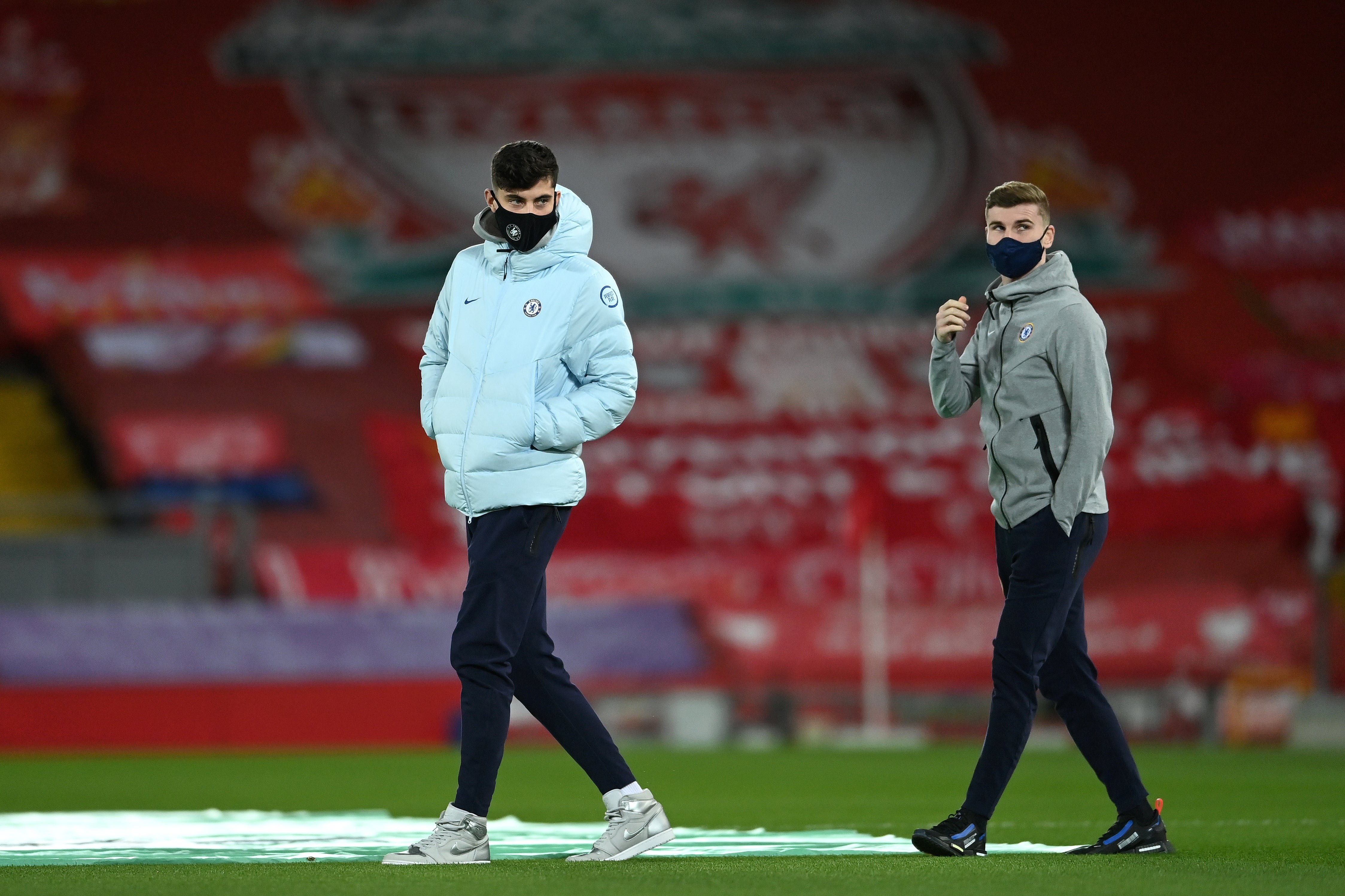 Kai Havertz and Timo Werner inspect the pitch at Anfield

Liverpool welcome Chelsea to Anfield this evening as both sides look to move up to fourth place in the Premier League table. Liverpool enter the fixture sixth in the standings on 43 points, while visitors Chelsea are one point and one place ahead of their hosts tonight.

The encounter also marks a meeting of German head coaches in Liverpool’s Jurgen Klopp and Chelsea’s Thomas Tuchel, who succeeded his compatriot at both Mainz and Borussia Dortmund in the Bundesliga. Chelsea are undefeated since Tuchel joined in January, though their encouraging domestic form gave way to two draws in their last two top-flight outings, against Southampton and Manchester United. Liverpool, meanwhile, had lost four in a row in the Premier League before ending that dismal run last time out by defeating bottom Sheffield United.

This clash with the English champions, whose title is essentially out of their grasp now, marks another test for Tuchel’s Chelsea, though the Blues have performed admirably in other matches that have appeared their most difficult since the German’s arrival – with victories over Tottenham and Atletico Madrid preceding the goalless draw with Man United. Follow live updates from Liverpool vs Chelsea at the conclusion of Fulham vs Tottenham.

Tottenham remain in eighth place but they are just four points now from the top four. Everton have just claimed fourth place with a victory of their own over West Brom.

Fulham stay in the relegation zone, three points behind Newcastle and Brighton but they’ve got the tough games of Liverpool and Man City to come.

90+4 mins: Full time. Tottenham claim the points! Tosin Adarabioyo’s first half, deflected own goal is the difference between the sides. Fulham responded brilliantly in the second and had a goal disallowed after it struck Lemina’s arm in the build up to Cavaleiro turning it into the back of the net. The home side maintained their attacking momentum but couldn’t find another way past Hugo Lloris. A disappointing end for Fulham but a delightful three points for Spurs who edge closer to the European places.

90 mins: There’s going to be four added minutes to play. This will be a tough beat for Fulham if Spurs can hold onto their lead.

87 mins: Fulham win a corner after Mitrovic has a shot sent out behind by Doherty. The corner is whipped into the box but is confidently claimed by Lloris who grabs the ball and drops to the ground.

84 mins: Massive save from Areola! Sissoko fires the ball into the edge of the box to Lamela who rolls it nicely into the area for Kane, sprinting through the backline. He lunges at the ball and knocks it towards goal but is charged down by Areola who blocks the effort with his body.

81 mins: Into the final 10 minutes now. Can Fulham find the goal that their second half performance deserves?

78 mins: A Spurs corner is fired into the box by Son. It bounces just before the first defender and skips through the penalty area without anyone getting on the end of the pass. Erik Lamela collects the loose ball and runs to the byline. He dribbles his way into the box and tries to find Kane but Reed intercepts the pass and whacks the ball away.

75 mins: A change for each team. Erik Lamela is on for Tanguy Ndombele for Spurs and Fulham bring on Joe Bryan for Antonee Robinson.

72 mins: Ademola Lookman is starting to look very dangerous for Fulham. His pace has enabled him to get free a number of times on the left wing. He puts a cross into the far post for Maja who is blocked from getting to the ball and Lloris plucks it out of the air.