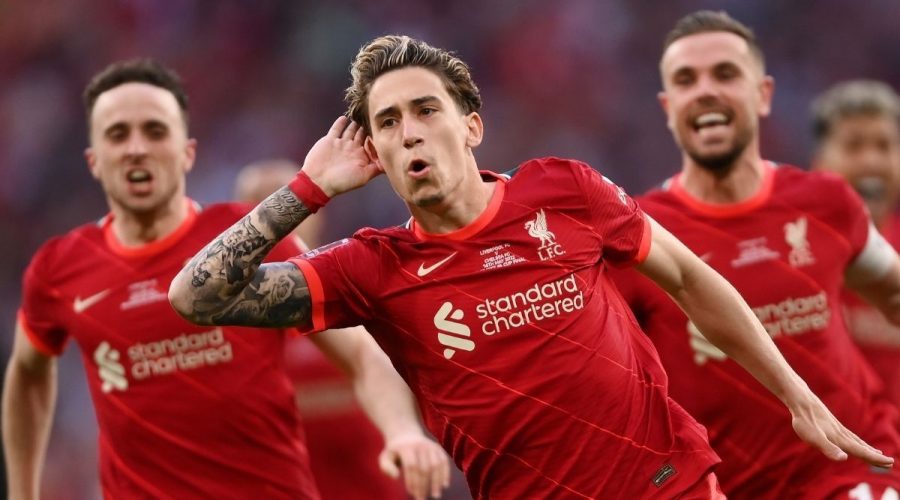 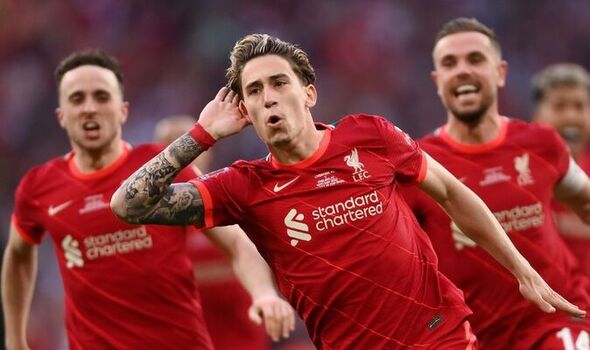 It was hardly a classic but Liverpool are winners of the FA Cup after defeating Chelsea on penalties after 120 minutes of grueling action. Kostas Tsimikas struck the winning spot-kick for the Reds after Alisson denied Mason Mount from the spot. Sadio Mane thought he’d blown his team’s chances of glory in a shootout that wasn’t short of an unexpected twist. Here’s how Liverpool rated…

The man of the moment. Was brave to make a great save to deny Marcos Alonso in the first half. Once again, very strong and confident when going one versus one against the Chelsea attackers. Didn’t get near many penalties but did make the all-important save to deny Mason Mount, which helped etch Liverpool’s name on the trophy.

Played one of the passes of the season with the outside of his boot to set Luis Diaz free in the first half.

His passing and crossing with both feet was exceptional. Yet this afternoon, the defensive side of his game was also immaculate, he made an excellent last-ditch tackle to prevent a shot at goal with just 15 minutes to play. Superb penalty, cool as you like.

Coped well against the physical presence of Romelu Lukaku. Defended smartly by dropping off the Belgian, as opposed to getting tight and being rolled. Excellent to stop N’Golo Kante in his tracks in extra time.

Also performed well against Lukaku, minimising his impact on the game. Partnership with Konate is really starting to blossom – although it’s a different to the established pairing with Joel Matip.

Subbed off after 90 minutes, which could potentially be a concern.

Ghosted in at the back stick but failed to get a decent connection with a header.

He then arrived in exactly the same spot for a massive chance after James Milner’s inviting cross but the Scotsman could only fire off the post from a matter of yards. Subbed with cramp.

Dropped back in to play as the No 6 in Fabinho’s absence. Composed, kept things ticking, screening the back four.

Brushed his passes expertly as you would expect. Always sizing up his next through ball but with the pitch reasonably compact, the locksmith sometimes had his work cut out trying to thread the ball through the eye of a needle. Cool as you like for his penalty.

Spaniard was infuriated with a strong tackle from Reece James and started snapping into a few himself.

Huffed and puffed. A performance that pretty much summed up his Liverpool career so far. Some great things but also some bad.

Keita has the quality to really have a say in matches of this magnitude but he doesn’t always have the confidence to execute it. Subbed for Milner.

So, so dangerous. Once again. This guy is already on the same level as Mane and Salah and that’s no exaggeration.

He just couldn’t find his finishing boots after bearing down on goal twice in the first half. Also came close to breaking deadlock after break when he turned brilliantly before firing wide.

Diaz then hit the post with less than 10 minutes to play and he was Liverpool’s brightest spark. Then ran Thiago Silva ragged before curling just wide of the mark.

There was more final agony for Salah, who was forced off in the first half with a groin injury.

He will be so desperate to be fit for the Champions League final. Quiet afternoon otherwise, was just starting to get into the game.

Looked sharp again, showing tremendous shape to shrug off defenders but the final part of his game was just slightly lacking. Match-winning penalty was saved by compatriot Edouard Mendy.

His movement was always a threat, something that was apparent when he made a near-post run and flicked over the bar. Still lacking sharpness in the final third though. Burried his penalty.

Didn’t take long to get into the game, thundering into Reece James. Put in a brilliant cross that Robertson fired off the post and made an important header in extra-time to prevent from Alonso from threatening Liverpool’s goal. Scored his penalty brilliantly.

Assured as ever after replacing Van Dijk. Made two very important tackles to stop Christian Pulisic and Hakim Ziyech getting through on goal.

Barely got involved after replacing Luis Diaz on his return. But scored his penalty when required.

Replaced Andy Robertson, who was suffering from cramp and he’s now a Liverpool legend after scoring the winning spot-kick, converting cooly under pressure.

He is adored by his club’s supporters and for good reason, he’s now making a huge contribution for his team.