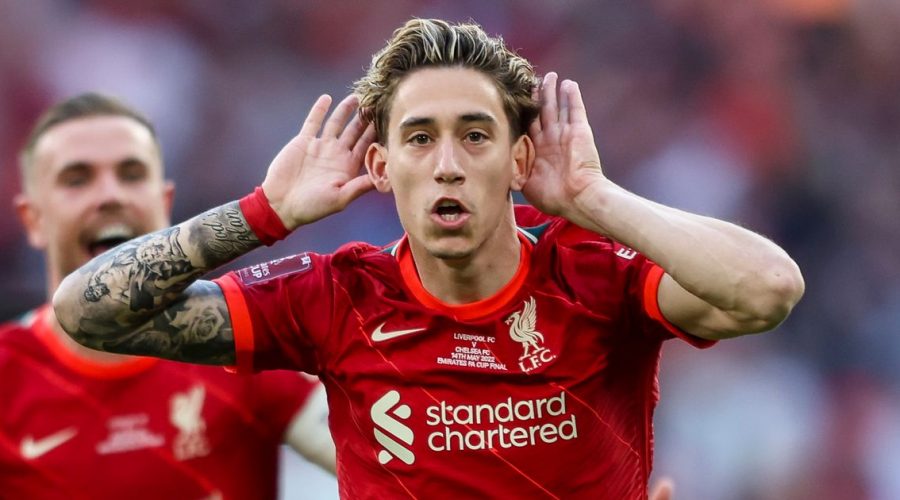 The Greece international left-back held his nerve after Mason Mount's miss to hand Jurgen Klopp's men a second domestic trophy after a win by the same method over the same opponents in the League Cup final back in February.

Sprinting off in ecstasy after netting into the bottom left corner and sending the keeper the wrong way, Tsimikas ran back towards his team-mates before turning round and cupping his ears to the blue half of the national stadium.

With his colleagues in tow, the 26-year-old arched his run back round to the Anfield faithful right past the gutted Mendy as the staff joined in with celebrations.

Tsimikas then told BBC of his winning effort: "It's very, very special for me.

"The manager asked me which number I want. I say number seven. He asks me why so far? I say I want number seven. And number seven gave me the opportunity to win the game.

HAVE YOUR SAY! Will Liverpool win a historic quadruple? Tell us in the comments section below

"I choose the right side and I score. And I am very happy with that. We want to win. Our goal from the start of the season was to go for it, hopefully at the end we are happy."

Adding of the club plans going forward: "We gave it absolutely everything. Big congratulations to the boys. We have to celebrate hard.

"But tomorrow is the next day, we still have a lot to do. We have the games in the Premier League and we have the big final."

Klopp admitted that he felt sympathy for Chelsea after their second Wembley final defeat on penalties of the season, while hailing his own side.

He said: "We have everything it takes to win trophies, we proved it by the way. We have a Club World Cup and a European Super Cup and I don't feel sorry this was at the beginning of the season and in winter.

"We were good in Champions League, strong in both domestic cups, we can produce peak performances and we have the mentality in the club to shape the mentality of the players, but Man City and Liverpool have shown you need this on a consistency."