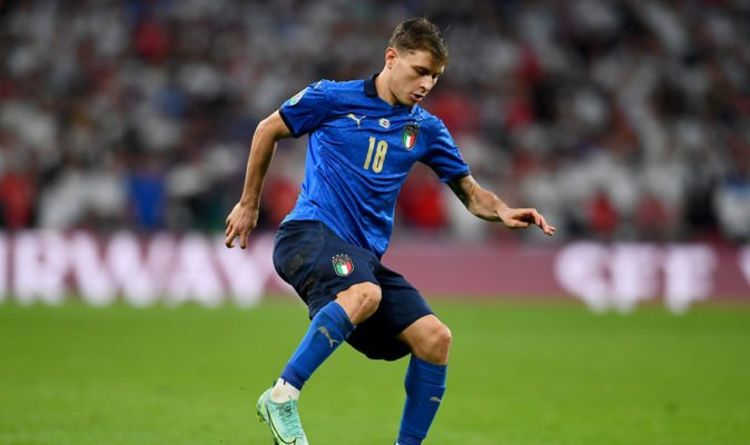 Liverpool and Tottenham have emerged as the front-runners to sign Italian midfielder Nicolo Barella this summer. The 24-year-old has just enjoyed the season of his career so far, playing an instrumental role in Inter Milan’s first Serie A title since 2010 and playing a similarly important part in Italy’s first European triumph for 53 years.

This summer has largely been one of damage limitation for Inter, who lost esteemed manager Antonio Conte after the club told him to raise money by selling players.

Along with Conte, flying right-back Achraf Hakimi has also been a casualty after switching to PSG, while the likes of Romelu Lukaku and Milan Skriniar have also flirted with the exit door.

The good news for the Serie A champions is that having raised over £60million from the Hakimi sale, another departure would no longer be for the purpose of staying afloat, but rather to raise funds for reinvestment in the market.

Losing a crucial player like Barella may not be their chosen method of doing so, but if new manager Simone Inzaghi has spending plans of his own, he may have no choice.

Barella is the kind of energetic, all-action midfielder who would surely fly under Jurgen Klopp at Anfield.

The Reds are still looking to replace Gini Wijnaldum who also left for PSG earlier this summer, and the Italian may be one of the only players in Europe who can match his work-rate.

The likes of Renato Sanches, Saul Niguez, Florian Neuhaus and others have been linked with Klopp’s midfield vacancy, but to no avail.

Irritatingly for Liverpool, Marca claim that Tottenham are pushing the hardest to lure Barella to the Premier League.

The report also claim that bids of around £55million are in the pipeline, although any prospective deal is still in its early stages.

New manager Nuno Espirito Santo and director of football Fabio Paratici are yet to see their new working relationship bear fruit this summer.

With a potentially ugly Harry Kane transfer saga looming on the horizon, the pair would be wise to step on the gas when it comes to conducting business.

The north London side have also been linked with Lyon’s Houssem Aouar to bolster their midfield, although he would not bring Barella’s defensive tenacity.

Nuno may have to develop Spurs’ tactics from last season, with box-to-box Barella not fitting neatly into the 4-2-3-1 deployed under Jose Mourinho.

Undoubtedly, the Portuguese will have tactical plans of his own, and his favoured two-man midfield while at Wolves would suit the Italian down to the ground.

Although the interest is there from Liverpool and Spurs, it does not change the fact that Inter are desperate to keep him.

Reports state that the Nerazzurri are set to offer him a new contract, despite their financial difficulties, as a desperate attempt to fend off interest.