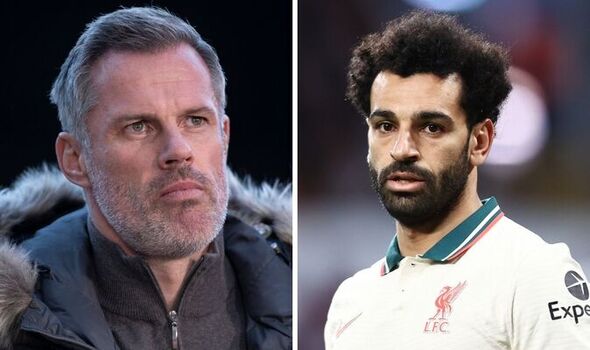 Mohamed Salah and Karim Benzema currently appear to be the early favourites for this year’s Ballon d’Or, but Jamie Carragher has explained why he feels Liverpool star Sadio Mane is the Premier League’s best hope. Salah was outspoken on last year’s Ballon d’Or voting, admitting he was “shocked” to finish seventh in voting.

But the Egypt international took it in his stride as he’s played a huge role in Liverpool battling on all four fronts this season. Benzema has similarly enjoyed a sensational campaign for Real Madrid with 44 goals in all competitions with an incredible 15 coming in the Champions League.

Both players will likely steal the headlines in the build up to the Champions League final, but Carragher feels Mane has a better chance of winning the 2022 Ballon d’Or than Salah. The former Liverpool defender feels Mane is “underrated and underestimated” and his 2022 campaign so far deserves more credit.

Carragher wrote for the Telegraph: “When I said earlier this week that Sadio Mane will have to get past me before he ever leaves Liverpool, I was only half joking. I may not be able to shadow world-class strikers as much as in my prime, but in Mane’s case an exception can be made.

“Any club trying to lure him from Anfield this summer ought to face a blockade. Mane is my favourite Liverpool player of the Jurgen Klopp era – often underrated and underestimated. Since January, the tendency to overlook him while Mohamed Salah grabbed all the attention has slightly changed.

“If Mane continues his current form he may help inspire Liverpool to four trophies, including the FA Cup against Chelsea this weekend. He will also be the Premier League’s most likely winner of the 2022 Ballon d’Or. The rules of the competition have been altered. When the nominees are considered, judgement will be based on performances across a European season rather than a calendar year.

“Which English-based player has had a bigger impact on the domestic and world stage in this campaign? Mane scored Senegal’s winning penalty in the African Cup of Nations, and repeated the trick to take his country to the World Cup. He must be a frontrunner.

“Playing a pivotal role in Liverpool’s quadruple bid may not have been enough to secure domestic Player of the Year ahead of Salah, but that vote was clearly based more on form during the first half of the season. The FA Cup and upcoming Champions League final are the last chance for World Player of the Year candidates to make their case.

“Providing the votes are based solely on football criteria – and there is no guarantee of that based on recent Ballon d’Or winners – it already looks like a shoot-out between Mane and Real Madrid’s Karim Benzema. That means there may be more at stake than a Champions League winners’ medal when they meet in Paris.”