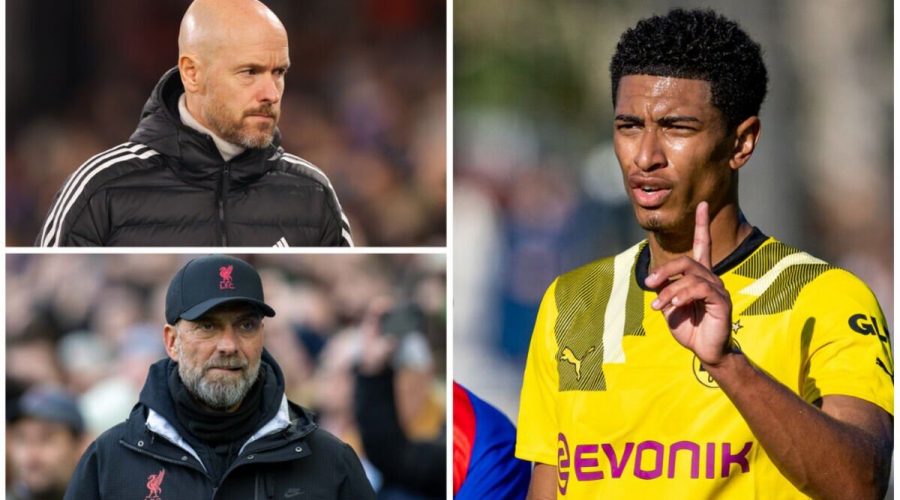 Jude Bellingham is reportedly set to turn down a new contract that would double his wages at Borussia Dortmund in favour of securing a move back to England, as the Premier League’s elite continue to chase his signature. The England starlet is expected to leave the Bundesliga outfit this summer with a move in excess of £100million and Liverpool, Manchester United and Manchester City are monitoring his situation.

Dortmund have all but accepted Bellingham will leave if he decides to force a move, but that has not stopped the German side from pulling out all of the stops to keep him at the club.

According to The Daily Star, club chiefs are planning to offer a huge wage hike to Bellingham in an attempt to convince the youngster to stay, with a weekly salary of £180,000-a-week offer to commit to a new long-term contract. That would double his current salary of £90,000-a-week after signing a four-year renewal in June 2021.

However, there are fears from within the club that Bellingham will snub their last-ditch efforts to keep him at Signal Iduna Park, with Premier League clubs able and willing to submit huge contract offers for the talented midfielder.

Liverpool are believed to be leading the race to sign Bellingham and could even use club hero Steven Gerrard to try and lure him to Anfield. But Manchester City believe they are in the driving seat to secure the £130m-rated star’s signature on the dotted line.

The report adds that the opportunity to link up with his former team-mate and friend Erling Haaland at the Etihad Stadium would play a key role in convincing him to join City ahead of Liverpool. Haaland and Bellingham enjoyed a fruitful partnership in Germany before the former’s £51m move last summer.

In addition, the chance to work and develop under Pep Guardiola – who has guided City to the Premier League title in four of the last five seasons – may be too good to turn down. City are understood to have kept in constant contact with Bellingham’s camp and have already sounded out his representatives about a move to join the English champions.

The 19-year-old has been a revelation since moving to Germany in a £25m deal from Birmingham in January 2020 and is the current club captain after being handed the role by head coach Edin Terzic.

Bellingham also played a key role in England’s run to the World Cup quarter-finals before their exit at the hands of France and his performances have only convinced the likes of Jurgen Klopp and Guardiola that he is worthy splashing the cash on.

Real Madrid, United and Chelsea cannot be discounted in the race for Bellingham, particularly given the financial commitment that would be required to land Bellingham. The west London club have already invested nearly £500m in transfer fees since Todd Boehly and Clearlake Capital’s takeover in May last year.

But it is expected to be a straight fight between Liverpool and City when the season ends, with Bellingham expected to earn at least £300,000-a-week to put him amongst the Premier League’s highest earners – indicating why Dortmund are powerless to prevent him leaving.