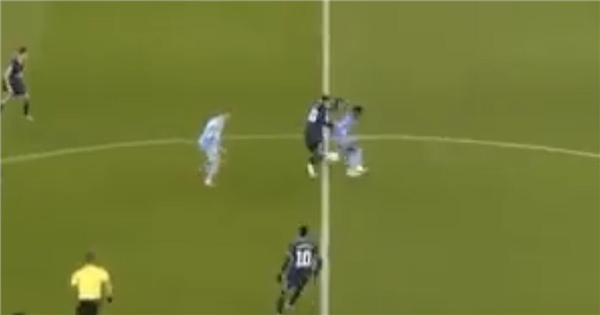 Lionel Messi only needed a few minutes to showcase his brilliance in Paris St-Germain's clash with Manchester City, leaving Raheem Sterling red-faced with an outrageous nutmeg on the England winger.

PSG have made the trip to Manchester for their penultimate Champions League group-stage outing, with a victory required to leapfrog Pep Guardiola's men into top spot.

Mauricio Pochettino fielded a typically-mouthwatering lineup at the Etihad, deploying star man Messi alongside Kylian Mbappe and Neymar in attack.

And just six minutes into Wednesday's match, the Barcelona legend left fans in awe on social media by producing a classy nutmeg on Sterling.

After being picked out in the centre circle by Neymar, Messi first turned on the ball and held off a challenge from Oleksandr Zinchenko.

Sterling then rushed over to help his team-mate, only to quickly regret it when the PSG superstar poked the ball through his legs and raced away.

Do you think Lionel Messi is the best player in the world? Let us know in the comments section below.

Fans took to Twitter to wax lyrical about Messi's nutmeg, which they felt "violated" Sterling on the night.

Another said: "Damn Messi sent Sterling for a hotdog".

A third commented: "Oi Messi is too rude violated Sterling".

Messi played a key role in PSG's opener in the game, following up some neat interplay with Ander Herrera and Neymar by pulling the ball across goal for Mbappe to slot past Ederson five minutes into the second half.

The winger made up for his first-half nutmeg humiliation by getting on the end of Kyle Walker's cross and prodding the ball past Keylor Navas to draw City level.

And with just under 15 minutes remaining, Gabriel Jesus came off the bench and capped a superb City move to complete the turnaround.