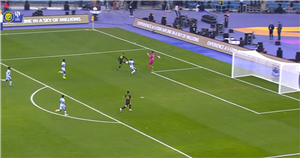 Ronaldo played his first game for Al-Nassr on Thursday evening in a friendly between the Saudi pro League's All-Star XI team and Paris Saint-Germain. But the match got off to the worst possible start for Ronaldo as his old enemy came back to haunt him yet again.

Having gotten one over the Portuguese legend in December by clinching his long-awaited first World Cup victory, Messi humbled Ronaldo again by netting a goal inside three minutes.

Messi was played through by a superb Neymar Jr pass. The Argentine hero latched on to the ball in the box and slotted it past the goalkeeper.

Do you think Lionel Messi is the greatest footballer of all time? Let us know in the comments section. Ronaldo, 37, had not actually featured yet for Al-Nassr since his £173m-a-year move was completed. The ex-Manchester United man received a two-match ban from the FA after knocking a phone out of an Everton fan's hand last season, which carried on to his new club.

The forward would have been amped up as he captained a team made up of players from Al-Nassr and Al-Hilal. Instead he was left visibly gutted at on to the only man who has more Ballon d'Ors than him – seven to Ronaldo's five.

Yet Ronaldo was able to leave his own mark on the game by scoring in the 34th minute. He netted a penalty to ensure the ever-long debate rages on, before notching a second after an initial header hit the post to make it 2-2 at half time, after Marquinhos had struck for PSG.