‘They are cowards… I’m sick of them’: Hibs boss Neil Lennon calls for ‘idiot’ to be banned after being hit with coin

Neil Lennon branded the Hearts fan who felled him with a coin a ‘coward’ after a night of Edinburgh derby shame.

A goalless Tynecastle draw between Hearts and Hibs at Tynecastle descended into scenes of shame when a Hibs supporter took a swing at home keeper Zdenek Zlamal minutes after Easter Road striker Florian Kamberi was sent off.

Angered by Lennon’s reaction to a stoppage-time Hearts goal being flagged offside, a supporter then struck the Northern Irishman with a pound coin thrown from the main stand.

"Ultimately it comes down to the individual."

"It was a pound coin, so he must have a few quid on him!"

Hibs boss Neil Lennon shares his few after he was struck by a coin during his side's 0-0 draw vs Hearts. pic.twitter.com/G6SMqp1hCd

Lennon tumbled to the ground in the technical area after being hit on the chin by the missile.

Insisting he would love to meet his assailant face to face, the Hibs manager said: ‘They are cowards at the end of the day. There is no train of thought other than wanting to hurt somebody.

‘Maybe we need stricter or tougher punishments. I don’t know what you would call that. Is it assault?

‘It was totally uncalled for. It was cowardly and I have to think of my safety. My jaw is really throbbing. 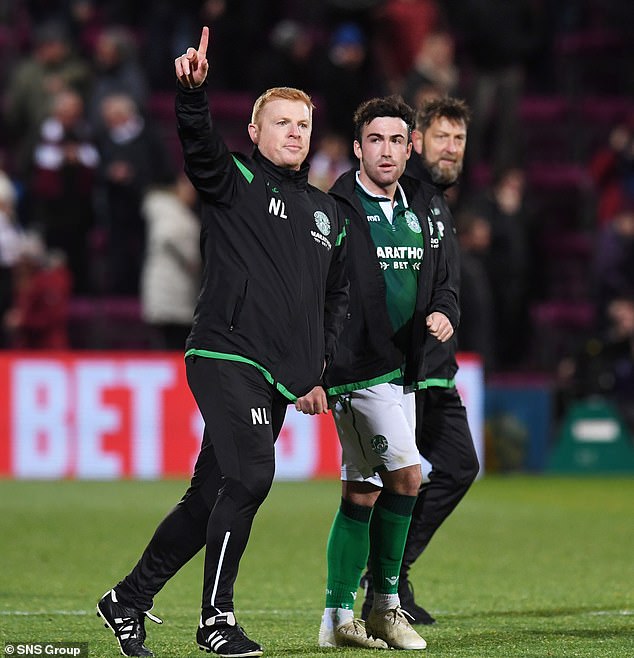 ‘At the time you are stunned and then the adrenaline keeps going but now that it has settled down, it is really sore.

‘You don’t see it coming, you just get the dolt from nowhere. We saw a linesman getting hit by a coin a few weeks ago and it is just totally unacceptable and it has to stop. It’s just badness. Badness.

‘The referee might have had some missiles thrown at him as well. This should be a showpiece game.

‘It was feisty, it was intimidating, everything you would expect. But if people can’t behave themselves they should be singled out and embarrassed and humiliated.

A typically frenetic derby ignited when Kamberi was shown a second yellow card for a clash with Ollie Bozanic, followed by a shouting match with Hearts full-back Ben Garuccio.

Minutes later Hearts keeper Zlamal was punched by a Hibs supporter as he went to retrieve a ball from behind the goal.

Insisting the issues transcend tribalism, Lennon called for the miscreants to be dealt with savagely. ‘It’s disgraceful,’ he added.

‘I don’t blame the club, you can’t legislate for the hatred of some individuals or the badness. What possesses people to throw things on the football pitch I will never know.

‘I believe Zlamal was hit as well and it’s just ridiculous. It is unacceptable and as a club we can only apologise and hopefully we will deal with the individual. 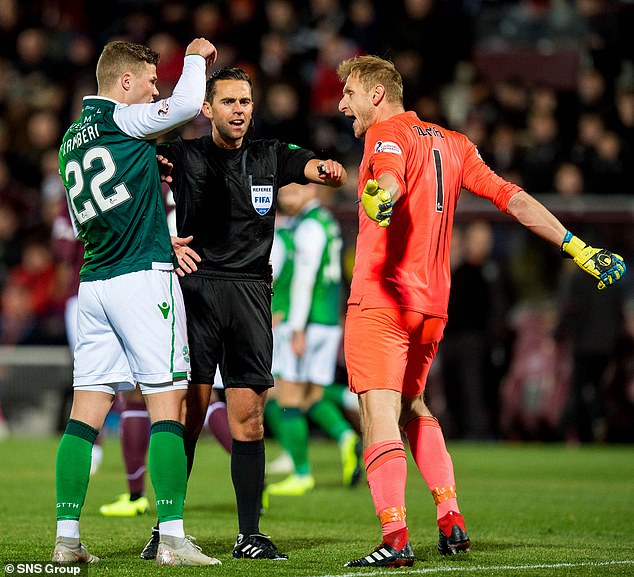 ‘This is a guy just doing his job, providing entertainment and the last thing he needs is someone attacking him. No physical contact is acceptable.

‘I don’t know if he is shaken up or hurt but we as a club will hopefully find the perpetrator and deal with him and humiliate him. He is blackening the name of our club and I don’t want that.’

Attacked by Hearts fan John Wilson in May 2011 when he was manager of Celtic, Lennon insisted his reaction to the disallowed goal was taken out of proportion.

‘Their mode of thinking will be “he brings it on himself”.’ Sorry. But that does not wash and that’s why I am angry.

‘And it could have been a lot worse. Why can’t individuals just behave themselves at a football game?

‘It was just mindless, I am lost for words at times. He’ll be full of regret like John Wilson (attacker in 2011) saying, “I’m really sorry, blah, blah, blah.” It’s just not good enough…’ 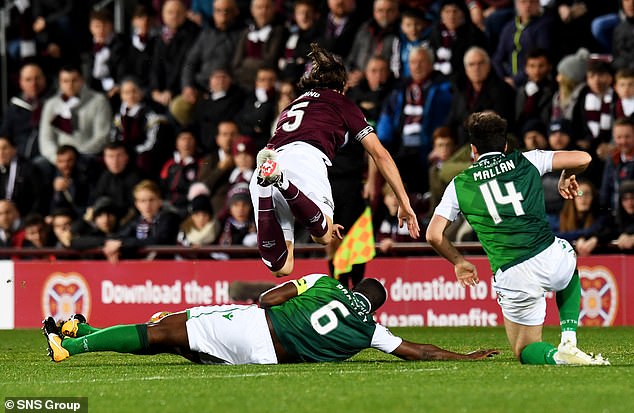 ‘Bobby (Zlamal) says someone struck him and it looks like Neil has been hit by a coin. It just saddens me, really.

‘Both sets of players are doing well at this moment in time, they don’t want to get beat, tension is high, aggression is evident throughout the match on the field. But there’s no place for things like that. You can sing and shout and swear all you like, but I got a fright when I saw Lenny on the ground.

‘I hope they catch whoever it was who threw it, it doesn’t matter what team they support, they need to be dealt with.’

‘There was a lot going on out there. There were players trying to get players sent off, which is unsavoury.

‘We stood up to it and were the better team for much of the game. While I’m pleased with the point I would have rather had all three.

‘I was delighted with the desire and application of the players in intimidating circumstances tonight.

‘We looked good. Obviously the sending off changed the flow of the game but I don’t remember our goalkeeper making any saves.’

November 1, 2018 Soccer Comments Off on Lennon calls for ‘idiot’ to be banned after being hit in face by coin
NFL News