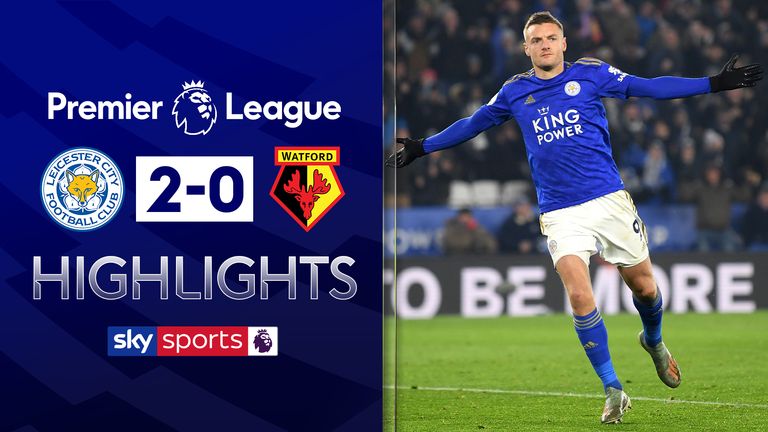 Vardy, who was also on target for the seventh league game in a row, scored from the spot 10 minutes after the break after Jonny Evans had been awarded a soft penalty for a hand in the face from Adam Masina.

Watford, under the guidance of caretaker head coach Hayden Mullins for the first time, had kept their hosts at bay well to that point but struggled once Leicester took the lead. They were punished late on as Maddison strode through before firing into the bottom corner in injury time (90+5).

The visitors had only one shot on target all game while Harvey Barnes and Ayoze Perez both twice missed presentable chances, but a Leicester side below their best still did enough to earn three points which lift them back up to second place, and eight points off leaders Liverpool.

How Leicester made history

Leicester’s seventh league win in succession matched their all-time top-flight run of victories, set under Matt Gillies in March 1963, and owed something to a questionable penalty decision from Craig Pawson which changed the game.

For most of the first half, Watford had held their own against the championship-chasing Foxes, but were thankful they were not behind early on to a pair of dreadful misses from Perez, who first fired over when well-placed and then volleyed well wide unmarked minutes later.

But once they managed to build a foothold in the game, Mullins’ side began to impress and looked to catch out their hosts on the counter with the pace of Ismaila Sarr and Gerard Deulofeu, albeit to limited effect in front of goal.

Leicester were struggling to create chances of note too, and Barnes took matters into his own hands when he danced through the box before Ben Foster kept him out with a comfortable low save.

Vardy might have had a penalty before the break when Pawson made his first big call of the night, booking the striker for a dive under what looked a clear foul from Adrian Mariappa, but a VAR review decided the contact did not meet the ‘clear and obvious’ threshold required.

Shortly after half-time Pawson would play his part again as he gave the hosts the chance to score from 12 yards, pointing to the spot when Evans made the most of Masina’s inadvertent touch on his face.

Both teams made a single change from their weekend games, with Christian Fuchs replacing Ben Chilwell in the Leicester defence.

Watford replaced the injured Jose Holebas with captain Troy Deeney in a change of shape from their 2-1 loss at Southampton.

With another VAR check complete and the decision standing, Vardy never looked likely to miss and outfoxed a motionless Foster to fire into the bottom corner and, as is so often the case, the opening goal seemed to finally spring the scorers into life.

Vardy almost added a second minutes after his first when he was played through by Youri Tielemans but after he lifted the ball over Foster, Masina raced back to acrobatically clear off the line.