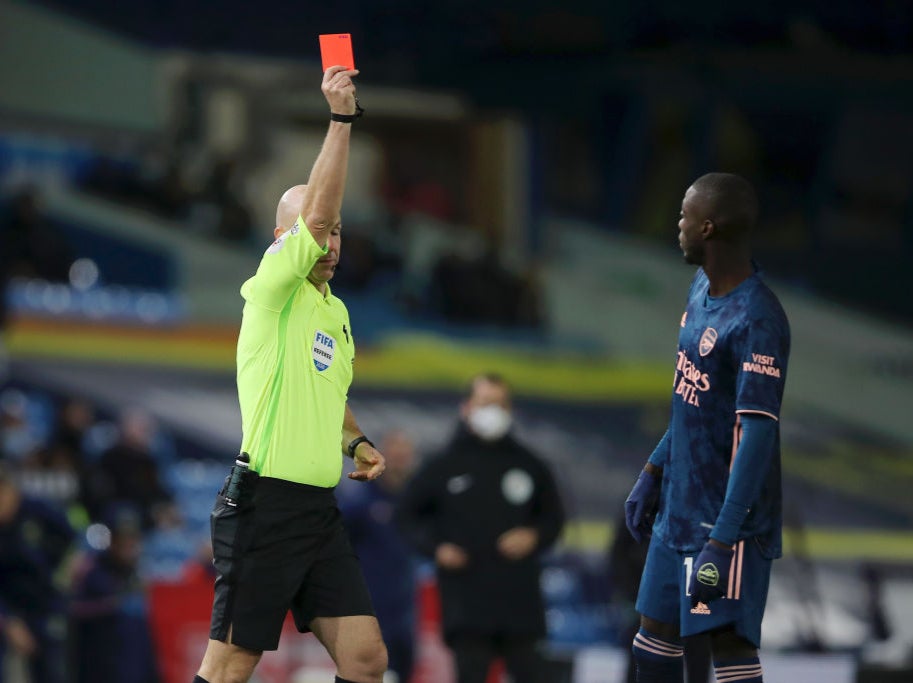 Nicolas Pepe is sent off in the second half

Leno – 7: A brilliant save in the first half kept Arsenal in the game before another from Dallas that had the German flying at full-stretch.

Bellerin – 6: Was solid if unspectacular, limiting his breaks forward due to the pressure Arsenal were under. One brilliant run, though, came so close to setting up Saka for a smash-and-grab winner late on.

Holding – 5: Dealt with Leeds’ aerial threat well as crosses came in. Lost Bamford on a couple of occasions.

Gabriel – 6: A solid performance under the circumstances, with Arsenal penned back for much of the second half.

Tierney – 6: Found it difficult to contain the threat of Rafinha on occasion but drove forwards well and energised his teammates as the game descended into a war of attrition.

Xhaka – 5: Struggled to contain the threat of Leeds’ midfield three, who were already running the game before Pepe’s red card. Allowed Rodrigo to cut inside on his left foot twice in the second half in moves that almost led to a goal.

Ceballos – 6: Made a few bright turns to try and add some impetus in the first half and pressed well.

Pepe – 3: Sent off in the second half for a mindless and completely unnecessary headbutt, and did little to force a breakthrough prior to that.

Willock – 5: Tried hard throughout, a much more dynamic presence in Arsenal’s midfield, but was unable to frighten Leeds’ defence.

Willian – 5: Had little impact in the first half, handled well by Ayling, and was substituted at half time.

Aubameyang – 5: Rarely managed to make an impression on the game, despite starting in his favoured central role.