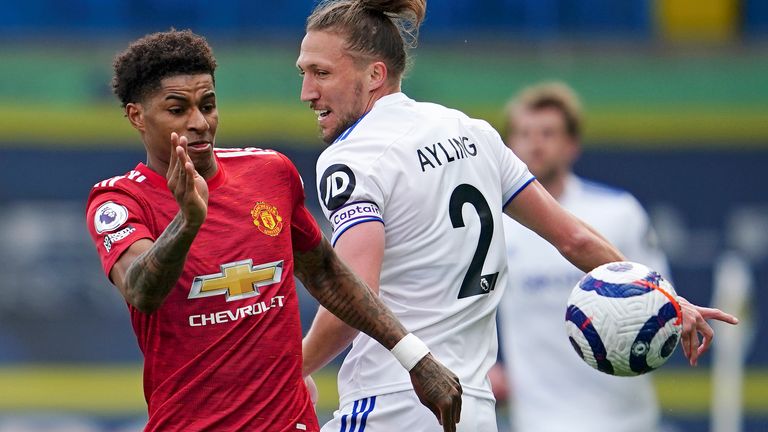 Manchester City only require two wins from their final five matches in order to clinch the Premier League title after Manchester United and Leeds played out a drab 0-0 draw at Elland Road on Super Sunday.

In a game of few chances, the visitors came closest to scoring in the opening period when Marcus Rashford’s free-kick was well saved by Illan Meslier.

Leeds’ best chance fell to Helder Costas in the second half, but his deflected effort flashed over the bar.

The result means Man Utd are 10 points behind their rivals City in second place. Leeds move up above Arsenal into ninth having extended their unbeaten run to six matches.

Man of the match: Mason Greenwood. 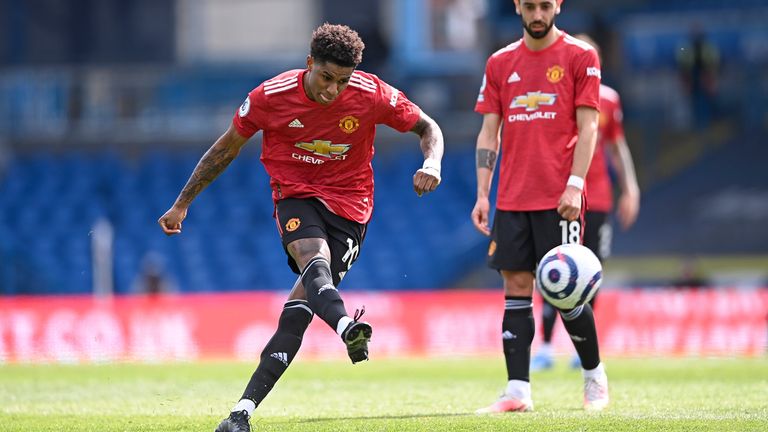 ‘This game has been awful, the quality’

The banner followed protests against the Glazer family’s ownership on Saturday, where thousands of fans assembled by the Trinity Statue, setting off flares, hanging banners and scarves outside Old Trafford, with many wearing the green and gold colours synonymous with fan protests against the Glazers which have occurred since the American family acquired the club back in 2005.

Sunday’s match was the first Premier League meeting at Elland Road since October 2003, but chances were at a premium during a cagey opening half.

Leeds fans were hoping to celebrate the first top-flight win against Man Utd since 2002 and they had penalty claims turned down when Jack Harrison’s cross struck Luke Shaw’s arm, but with it down by his side, referee Craig Pawson was unmoved. 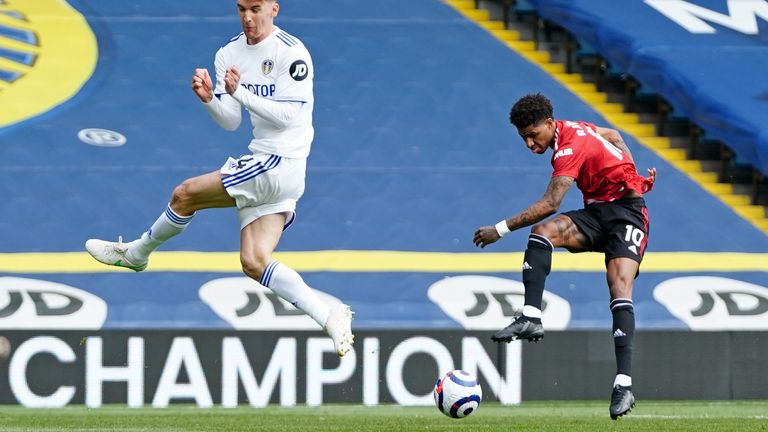 Marcus Rashford, who had overcome a foot injury, had already seen one shot dragged wide when he was fouled by Luke Ayling on the touchline to draw a booking for the Leeds captain but Bruno Fernandes’ ensuing free-kick was flicked over by Patrick Bamford.

The next time Fernandes was fouled by Pascal Struijk on the stroke of half-time, Rashford pulled rank as his dipping effort was brilliantly tipped away by Meslier. It meant for the fifth Premier League game in a row, Man Utd failed to score in the first half.

Paul Ince told Sky Sports: “It looks like Manchester United’s minds are on Thursday. There’s no energy, no urgency.” There were very few early signs that the second period would provide greater entertainment as it took until the 57th minute for either side to create a noteworthy chance, Fernandes dragging Aaron Wan-Bissaka’s cut-back wide.

Man Utd won the reverse fixture against Leeds at Old Trafford 6-2, but this was proving a very different encounter as Mason Greenwood drew a smart save low down from Meslier after latching on to Fred’s through ball.

“Greenwood is the one who has shown a bit of class when the ball has been at his feet,” said Sky Sports’ Jamie Carragher. The game briefly burst into life on the hour-mark as Ezgjan Alioski’s last-ditch tackle denied Dan James before Costa’s shot on the counter deflected off Wan-Bissaka and landed just over. Mateusz Klich entered the fray in the final 15 minutes, and he was immediately involved as he was played through by Patrick Bamford but his tame shot was straight at Dean Henderson. “This game has been awful, the quality,” said Carragher.

He was right, as it ended in an uneventful stalemate. What the managers said

“Even if they had more of the ball to attack. They had a lot more attacks then we did. But I insist that all that we did in this game I value as it allowed for the game not to become unbalanced.

“To think doesn’t get you tired, nor to look. What was moving was the effort that the team made. If we didn’t bring this big energy, we wouldn’t have been able to balance it. It’s true the game opened up more towards the end, and as it grew the spaces opened up but I think the draw is a good enough reward given how the game went. It was a sufficient reward.”

Man Utd boss Ole Gunnar Solskjaer: “There’s no guarantees in football that’s for sure. I thought we played well, dominated the second half, just didn’t have the ball to fall correctly for us in the moments we had.

“When two teams meet you create problems, you solve problems, they give you things to think about and we made them adjust to us. We put a really big shift in. I have seen Leeds run over teams in the second half and it was the opposite.

“You don’t lose momentum, we are disappointed not to win but the boys have a lot of respect for Leeds. This is not going to be something we look back on as derailing our season.” “It was tight. We had control of the game without punishing them. We knew how they would play, our attacking players love a one v one but today it wasn’t to be.

“We kept them to a minimum, we were solid. We just couldn’t find that edge. The intensity was there, both teams were trying to play the right way.

“Bruno Fernandes had the best chance of the game and on another day he puts it in the back of the net and we take the points. It’s a big week for us.” “Sometimes you can be fooled by results, thinking a team is playing well but we saw against Burnley last week and also today, they are so inconsistent. I didn’t see they had any tempo. The intensity wasn’t there. It was that bad the referee blew up before the end of injury time. It was a bad performance from both teams, like watching a kids team play.

“United need to do a lot better on Thursday. Some of the decisions [Ole] made. Cavani came on for six minutes, United needed a goal. They took Rashford off when they had two sitting midfielders.

“Van De Beek, who they paid £40m for, gets three minutes. These decisions can’t be right if you are going to win football matches. United have always been brought up on winning games, trying to find a way to win games.” Leeds travel to face Brighton in the Premier League next Saturday at 3pm.

Manchester United host Roma in their Europa League semi-final first leg on Thursday at 8pm before returning to Premier League action on Super Sunday as they host Liverpool; coverage starts at 4pm with kick-off at 4.30pm, live on Sky Sports Premier League and Main Event.