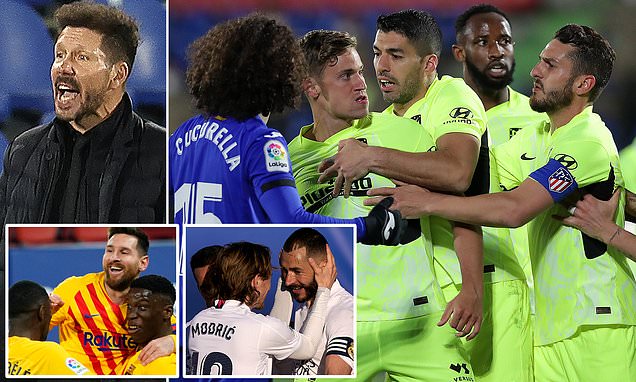 LaLiga remains Atletico Madrid’s to lose but they look like they need the season to end in five games’ time, not 11 – Barcelona and Real Madrid feel they can close the gap and Diego Simeone needs Joao Felix and  Moussa Dembele to start firing

The cartoon in Barcelona paper Mundo Deportivo on Monday morning had Ronald Koeman pulling back the shirt of the escaping Diego Simeone in the style of Gerard Pique on Kylian Mbappe – the difference being that Barca believe they really can catch Atletico Madrid.

Win on Monday night and Ronald Koeman’s side will go four points behind Simeone’s team who were 12 points clear back at the end of last year. That four-point lead becomes one point if Barcelona beat them on May 9 at the Camp Nou.

And Barcelona are only half of Atletico Madrid’s problem. 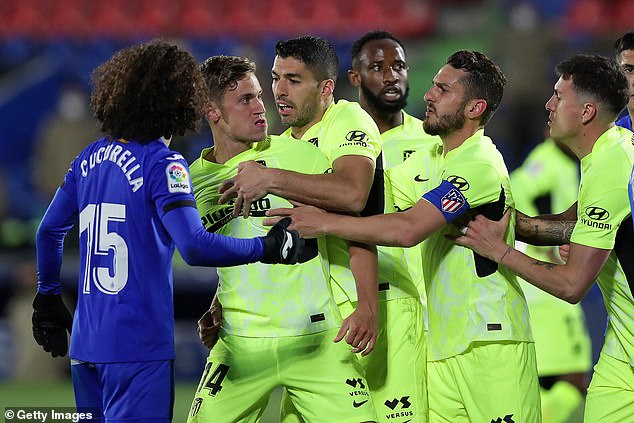 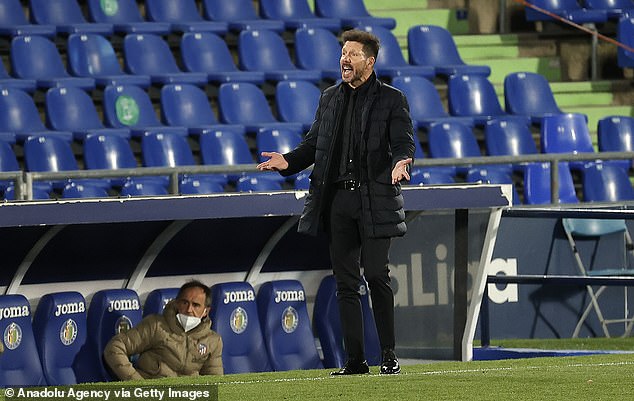 Real Madrid won again at the weekend with Karim Benzema pulling another late rabbit out of the hat. The gap between the two Madrid clubs is six points but their presence is perhaps even more ominous such is the history between the two clubs with Atletico twice denied winning the Champions League by their neighbours: first in injury time and extra time, and then on penalties.

Atletico’s biggest problem is that they look like they need the season to end in five games’ time, not 11. They are slowing up with still so much ground to cover.

It’s happening within games; matches are proving too long for them too. Benzema’s late equaliser in the Madrid derby 10 days ago was an accident waiting to happen. It was the third time they had conceded goals in the last five minutes of games at home.

There was also inevitability about them not scoring against ten-man Getafe at the weekend. Luis Suarez hit the post with a clever lob late in the second half, and supersonic second striker Marcos Llorente sprinted down every lost cause but the team’s top scorers could not find the net and when they don’t Atletico are tending to come up empty. 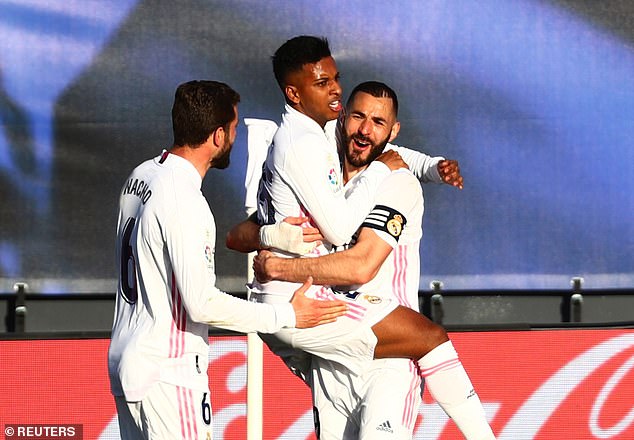 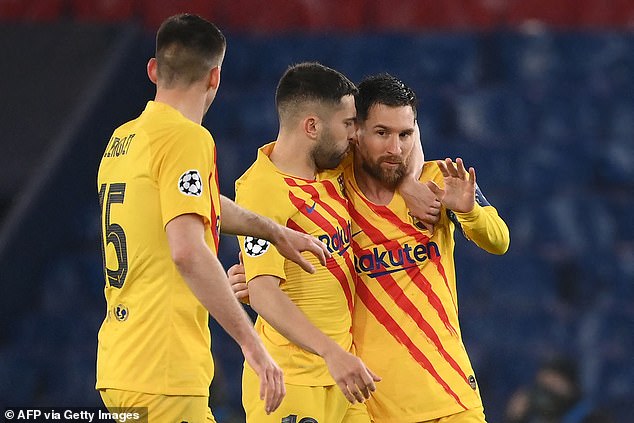 WHAT A DIFFERENCE A MONTH MAKES…

They need more from Joao Felix who still doesn’t look like a £113million player in the making. His technique is beyond reproach but he appears to have neither the physical attributes nor the personality to take charge of games. He was not helped by a positive coronavirus test that kept him out of the team in February when the pandemic took its toll on the squad with as many as six players testing positive.

New signing Moussa Dembele was another who had to self-isolate and so the player Simeone had hoped would replace Diego Costa, and give the team vigour and threat from the bench, was slow to get up to speed.

With limited attacking options the Atletico coach has perhaps felt forced into more conservative late changes in games and they have not paid off because the team no longer seem able to take the lead and then protect it.

Defensive weakness arrived with the suspension of Kieran Trippier. Suddenly a team that had only conceded six goals in the first 12 games of the season failed to keep a clean sheet in seven straight games – an unwanted new record in Simeone’s nine years at the club.

The good news for Simeone is that Trippier is back now. And Dembele is finally fit and almost firing. He was brought on at the weekend and got in the positions to win the game for his team albeit ultimately failing to hit the target. 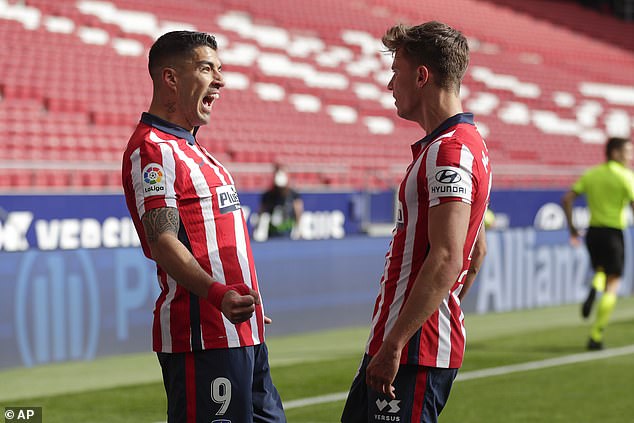 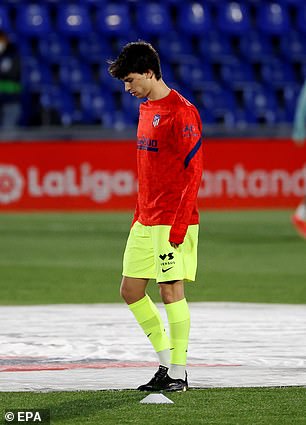 But he does look like someone who could give Atletico the extra goals that might just see them over the line.

The bad news is that just as Simeone is getting players back so are his rivals. Real Madrid have Sergio Ramos available again. Rodrygo and Fede Valverde are fit once more. And although Eden Hazard’s problems continue, and he is out of the Atalanta game, the club and coach Zinedine Zidane almost seem to have grown accustomed to not having him available.

Simeone has not been fazed by the way his team’s lead has been whittled down. ‘People thought we were going to win by 15 or 20 points’ he said after the Madrid derby ended in a draw.

At the weekend he predicted that Real Madrid and Barcelona would not lose another match, so the mind games are now fully activated.

It may be that whoever has has the fewest missing players between now and May 23 will win it. 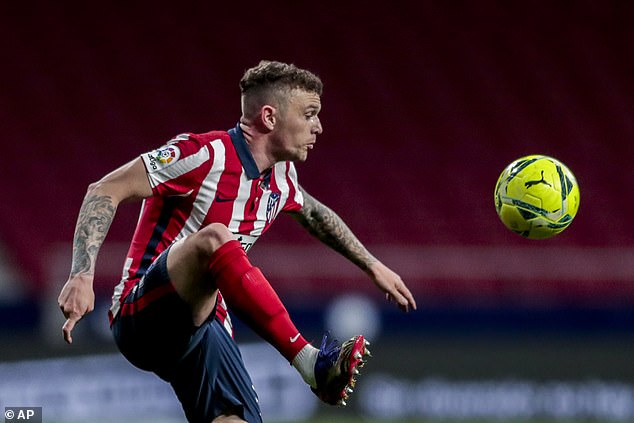 Perhaps that’s why Atletico fans find themselves in a very strange position this week – they want Real Madrid to win.

Zidane’s side staying in the Champions League will be bad for their fixture programme and good news for their rivals.

The league remains Atletico’s to lose but it’s no longer a title that the other two sides feel they can’t win.

‘We have two monsters behind us,’ said Simeone at the weekend. ‘They want to be where we are.’

Which for now at least is top of LaLiga.

March 15, 2021 Soccer Comments Off on LaLiga remains Atletico Madrid's to lose but they're feeling the heat
NFL News