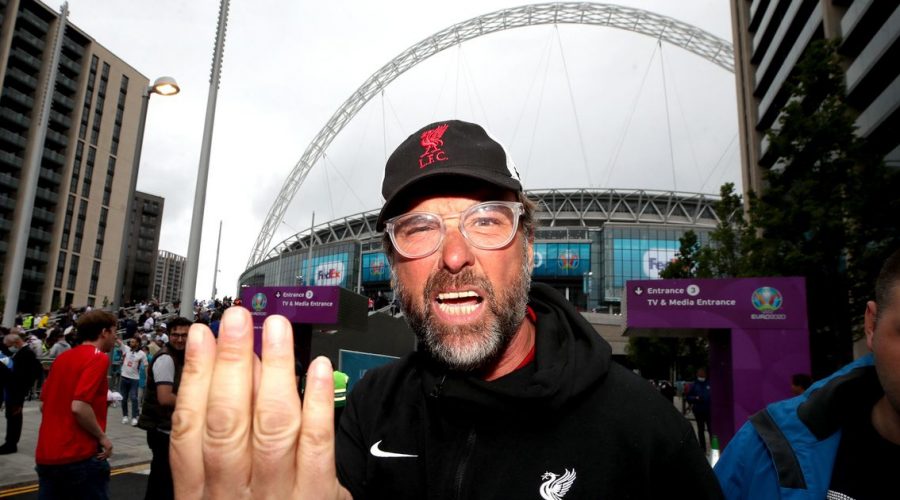 Jurgen Klopp's doppelganger has been pictured enjoying the Euro 2020 festivites with the England fans ahead of the Three Lions round of 16 tie on Tuesday afternoon.

Die Mannschaft visited the captial for the first time since 1996 at a major tournament when current England boss Gareth Southgate missed a crucial penalty in the shootout with Germany going on to win the championship.

A young Jurgen Klopp might have been celebrating that day in his native homeland but it doesn't appear that his looklike was.

The wannabe Liverpool gaffer was seen singing along to Frank Skinner and David Badiel's Three Lions classic with "it's coming home."

The Klopp doppelganger was spotted outside Wembley before the game with fans taking to twitter to praise the effort of his costume:

Did you mistake Klopp's doppelganger for the actual Liverpool boss? Let us know in the comments section

While one Three Lions' supporter was more jubilant it appeared Klopp had chosen to support England over his homeland, although he may have been greatly mistaken.

With a 2-0 win on the night it would take a brave man to bet against England now.

Joint favourites with France before the tournament, the Three Lions are still yet to concede a goal at Euro 2020 and face either Sweden or Ukraine on Saturday for a place in the semi-finals.