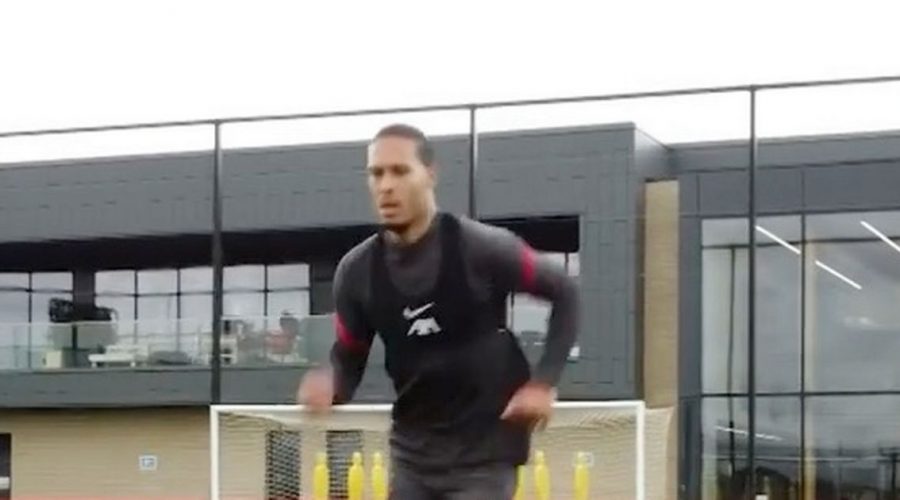 Virgil van Dijk boosted Liverpool fans when he shared a clip of himself running – but Jurgen Klopp has warned the defender is "quite a way" from a return.

Van Dijk has been a huge miss for Klopp's side this season, with his knee injury proving a huge factor in the Reds' title defence falling apart.

Fans have been praying the centre-back can return before the end of the season, with Liverpool facing a desperate battle to finish in the top four going into Sunday's Premier League showdown against Manchester United.

Ahead of the trip to Old Trafford, Van Dijk gave supporters some hope when he posted a video of himself running the length of the pitch at Liverpool's training ground.

But Klopp played down expectations of an early return as the Dutch defender continues his rehabilitation from a ruptured cruciate ligament sustained in the Merseyside derby back in October.

The manager said Van Dijk and fellow injury victims Joe Gomez, Joel Matip and Jordan Henderson are all running again, but are not yet ready to return to full training.

“I don’t have enough English words to describe the same thing more often," said Klopp when asked about Van Dijk's recovery on Friday.

“It means nobody told me, ‘Fasten your seatbelt, make yourself ready, the boys will be in team training next week.’ No, nothing changed really, but they are in a good way.”

Van Dijk was seen running in a straight line in the video he shared on his Instagram page, while he has also been captured on camera undergoing a handful of individually-tailored training sessions in recent weeks.

Klopp's comments suggest he may be starting to progress beyond simple straight-line running, and the fact that he is "in a good way" bodes well for his recovery.

But fans can't get excited about a return to action until he joins the rest of his team-mates in full training – meaning the chances of seeing Van Dijk in a Liverpool shirt again this season are still remote.

If his rehab continues to go smoothly he will have a better chance of making the Netherlands squad for this summer's Euro 2020 finals, with his country's campaign starting against Ukraine on June 13.

But team boss Frank de Boer has admitted he is "not counting" on Van Dijk being available – and said he would respect the defender's decision on his fitness.

De Boer said back in March: “He still has eight weeks. There can be all kinds of setbacks. A week or two of setbacks could mean he can’t play games for Liverpool then I can imagine that they say: ‘Nice, you can focus on next season’.

“But we have to wait. It has always been a race against time. It is also how Virgil himself stands. We don’t want to put pressure on Virgil.

“Anything he can contribute to Liverpool and possibly us would be a bonus. I’m not counting on it right now but if it did, it would be fantastic.

De Boer added: “Ultimately, he must have a good feeling himself. He must do it himself and must have confidence in it himself. The choice mainly lies with him.

“When the moment comes and we know how he is doing, you agree with him what he can do then I have to make a decision about it.

“We now let him work on his recovery calmly. It is now going well. We don’t know whether that is enough.”