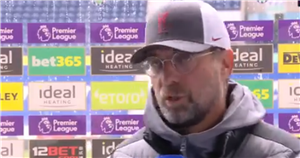 It comes after the Blues missed out on the Morocco international, who looks set to sign for Paris Saint-Germain in the coming days.

Inter Milan have had to sell the full-back as they experience financial trouble while PSG were happy to stump up the asking price.

Chelsea, who never made an official bid, were only prepared to meet a fraction of the €80m valuation but were looking to throw players in the deal, including Marcos Alonso and Davide Zappacosta.

However, Hakimi has always had his sights set on PSG and has agreed personal terms with Mauricio Pochettino's side.

Thomas Tuchel is already moving to find a replacement with a wing-back on his shopping list and has targeted Wolves star Adama Traore.

The Spain international is famed for his impressive physique and explosive pace, coupled with a remarkable ability to beat a man with his dribbling skills.

He has frequently tormented defences in the Premier League while at the Molineux, not least Liverpool in the past.

It even stirred Klopp in his post-match press conference, who admitted his side could not live with the former Barcelona ace and once branded him "unplayable".

Klopp said back in December 2019: "He finally found his manager [Nuno Espirito Santo] who found a position for him. At Middlesbrough he was exceptional, but somebody had to give him the right information.

Should Chelsea sign Adama Traore? Have your say in the comments below.

"[He is] a big, big talent. You would never have thought he is that young, but he is still very young, and now he has found [the right manager].

"It was always clear it would happen one day, and now it has. Good for Wolves.

Chelsea are holding their cards close to their chest this transfer window, though they have targeted Borussia Dortmund hotshot Erling Haaland.

While interest in Traore remains, there is yet to be an official approach but that could change after Euro 2020 with the winger currently with the Spain team.