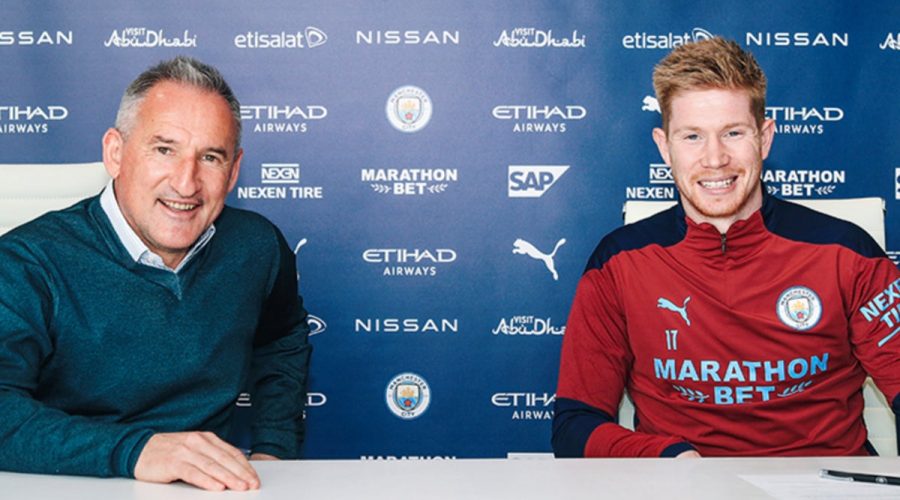 Kevin De Bruyne has signed a two-year contract extension committing him to Manchester City until the summer of 2025 and potentially stretching his stay at the Etihad to a decade.

The 29-year-old was eager to stay in Manchester following manager Pep Guardiola’s agreement of a new deal and has represented himself in talks with the Etihad club.

De Bruyne and City reached an agreement earlier this week, with the Belgium international thought to have agreed a small increase on his £300,000-a-week wage.

De Bruyne won the PFA Player of the Year last season and is in line to lift his third Premier League title in the coming weeks, with Guardiola’s side enjoying a healthy 14-point lead at the top of the table.

City also remain in contention to win a historic quadruple after De Bruyne scored and assisted both goals in their 2-1 quarter-final first leg win over Borussia Dortmund in the Champions League on Tuesday night.

Guardiola’s side have an FA Cup semi-final against Chelsea and an EFL Cup final against Tottenham Hotspur later this month.

“I could not be happier,” De Bruyne said. “Since joining City in 2015, I have felt at home. I love the fans; my family are settled here in Manchester and my own game has developed really well.

“This football club is geared for success. It offers me everything I need to maximise my performance, so signing this contract was a straightforward decision. I am playing the best football of my career and I honestly feel there is more to come.

“Pep and I see football in the same way. Having that relationship with a manager is so important to me because our objectives are totally aligned, and we want the same things.

“My focus now is on ensuring we have a successful end to the current campaign. Our results and performances so far have been excellent, but we need to make sure we end the season with the silverware we deserve.”

Txiki Begiristain, City’s director of football, said: “This is a very significant moment for this football club.

“Kevin is, without question, one of the best players in world football. His performance level has been remarkably consistent since coming to City, and in the last few years he has developed into one of the game’s elite players.

“His talent is unquestionable – but he is also a consummate professional whose dedication to Manchester City during his time here has been nothing short of remarkable. He constantly seeks to improve, and his approach is the perfect blueprint for any young player looking to carve out a career.

“We are delighted he is our player and I look forward to watching him during his peak years here at Manchester City.”

Having tied down De Bruyne and Guardiola before him, City are understood to be keen to agree renewed terms with Raheem Sterling, whose current Etihad deal runs until 2023.