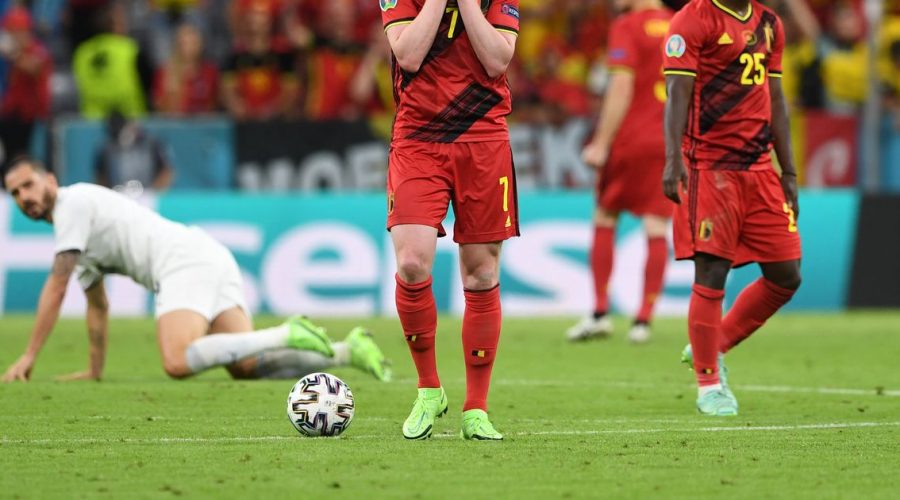 Kevin De Bruyne has explained how he played with torn ankle ligaments during Belgium's Euro 2020 quarter-final defeat at the hands of Italy on Friday night.

The Azzurri triumphed as 2-1 winners on the night, goals from Nicolo Barrella and Lorenzo Insigne enough to hand Roberto Mancini's side the win despite a Romelu Lukaku penalty offering the Belgian's hope.

Their exit from the European Championship perhaps represents Belgium's golden generation last chance at success in a major tournament, the Red Devils players failing to live up to the lofty expectations placed on their shoulders.

After the game, while the sombre mood around the Belgium camp lingered, De Bruyne revealed he had played the entire contest injured in a move that is unlikely to go down well with club side Manchester City.

Speaking to UEFA.com, the Belgian midfielder explained: "For me personally it has been four or five weird weeks. But I especially want to thank the medical staff.

"It was a miracle that I played today because there was definitely damage to my ankle. A tear in my ligaments. But I felt responsibility to play for my country today. Too bad I couldn't do more."

One of his side's most crucial players, it is understandable why the Belgium coaching staff were desperate to get De Bruyne on the pitch, injured or not.

When asked about the way the match went, De Bruyne told BBC Sport: "I think we tried everything to win that match.

"They scored a fantastic goal, but the first one may have been a mistake on our part. They had more possession, and the ball didn’t go in for us, which is a shame. Getting eliminated is always a disappointment."

His sentiments were echoed by teammate and Real Madrid goalkeeper Thibaut Courtois, who claimed: "This hits hard. But we knew it was going to be a tough game.

"We had two opportunities but their keeper made a good save and I think we gave the first goal away a bit too easily, it really could have gone either way, but Italy deserved to win here."

De Bruyne is likely to return to Man City in the coming weeks to receive further assessment on the damage done to his ankle to determine whether he faces a lengthy spell on the side-lines.