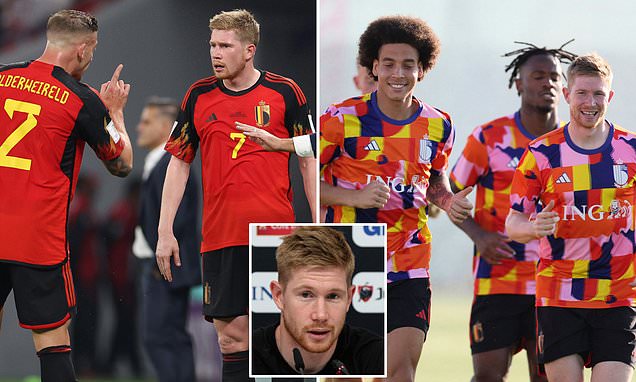 Belgium playmaker Kevin De Bruyne admitted that it would be difficult for his team to replicate the style of football that his Manchester City side are capable of at the World Cup.

Roberto Martinez’s side struggled for fluency at times against Canada, despite being the favourites, and De Bruyne insisted that Belgium would not be able to reproduce the aesthetic football regularly on show at City.

The Maple Leafs were unfortunate not to come away with something from the clash on Wednesday, after star man Alphonso Davies missed a first-half penalty and some wayward finishing denied them a point. 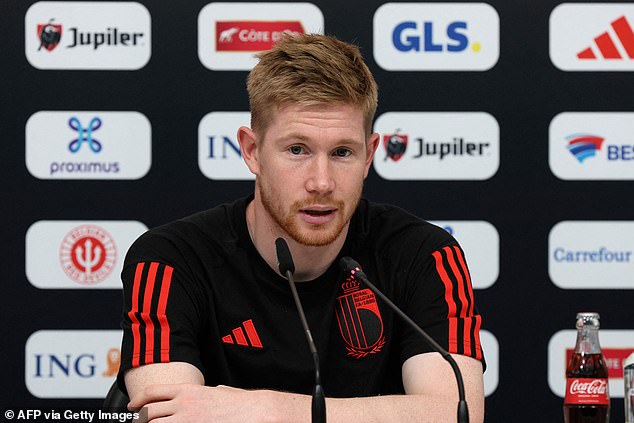 At a news conference at Belgium’s team base on Friday, 48 hours ahead of their next match against Morocco, he admitted it was difficult to expect him to replicate his club form even if he wanted to do so on the World Cup stage.

‘We can’t play in the same way as Manchester City. As a national team you have to adapt to the players you have around you,’ he said.

‘Does it frustrate me sometimes? Yes, but I should show that less although that is the perfection I strive for.’

On Friday, De Bruyne said he was delighted to hear that Guardiola had signed a new deal with the club. 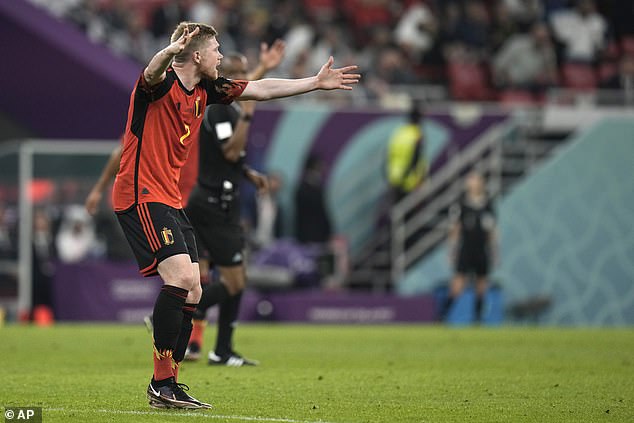 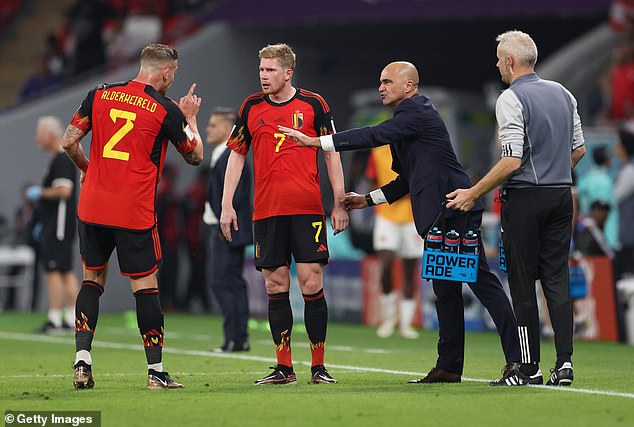 ‘It makes my life a lot easier. The way he leads the team is very clear and I feel very comfortable with him. Both our contracts run to 2025, so that makes it easier. I could not be happier.’

De Bruyne has risen to prominence in recent years as one of the best midfield players on the planet, with much of that a result of his fearsome partnership with Guardiola, producing 73 goals and 121 assists.

The 31-year-old was also quick to admit on Friday that he needed to reign in his frustrations at the World Cup after several belligerent displays in his side’s first game but said sometimes his emotions got the better of him. 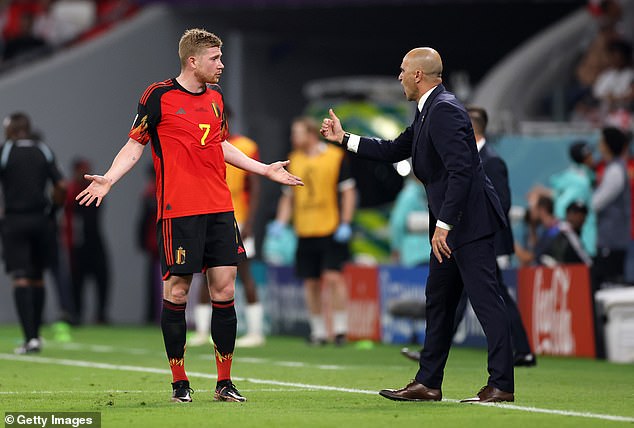 De Bruyne, 31, waved his arms in frustrations in the direction of coach Roberto Martinez in the first half of his country’s opening Group F match at the tournament in Qatar as Canada dominated the midfield exchanges.

He did not celebrate when Michy Batshuayi scored a counter-attack goal near the end of the first half that eventually ensured an unconvincing 1-0 win for Belgium on Wednesday.

He was also involved in a finger-wagging exchange with team-mate Toby Alderweireld as Belgium delivered an under-par performance, despite being second in the FIFA rankings.

‘I do know that my reactions are not always good,’ he added. ‘I also look for moments afterwards to find that peace but people know that it’s my way to help the team play better and get more out of the game.

‘But of course, I also have to learn to react in a better way. Every now and then the emotions spill over but that’s also part of the game. 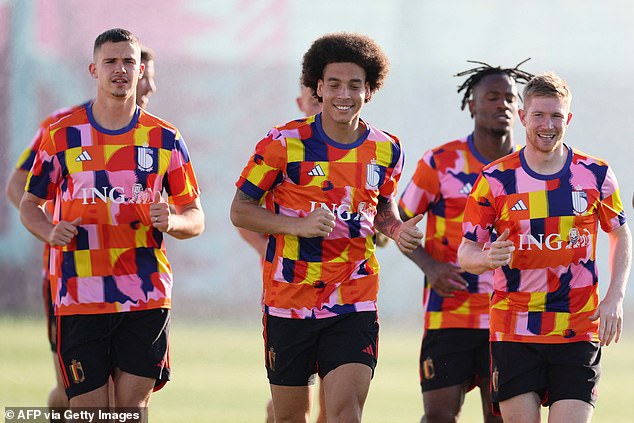 ‘I try to help my team handle things the best I can do, sometimes I get very agitated because I’m a perfectionist and I want everything to be really good and I like to play good football.

‘But I also know that I have to adapt to my teammates and that I have to play with them and help them, and that’s what I try to do as much as possible.

‘I think for a lot of years and games I’ve done a good job and that I can still help this team go forward, and that’s the only thing I can do for them.’ 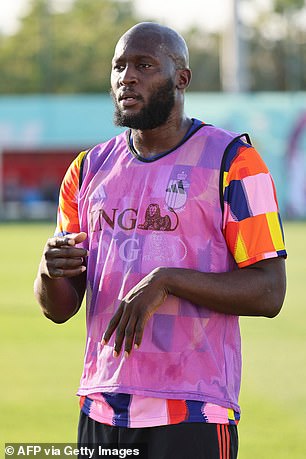 Belgium – who often seemed blunt in offence against Canada – will look to the return of Romelu Lukaku, whenever that may come, as a chance to change their fortunes.

Lukaku is his country’s record goalscorer, and De Bruyne believes his return to the squad will strike fear into the hearts of defenders.

‘Obviously it would be a boost, somebody who is so prolific, who weighs on the defense, can only help our options. I know he’s not played for a long time, but even having him coming off the bench may be the beginning of whatever.

‘Defenders would be more scared of him, and he gives us options that maybe for the moment we don’t have, so it’s a good thing.’

Captain Eden Hazard has himself only recently returned from the latest in a long list of injuries that have hugely impacted his time with Real Madrid.

And as a result he has struggled to replicate the form that saw him become one of the most highly-sought attacking players in Europe before his eventual move to the Spanish capital from Chelsea.

‘He’s getting better, I think obviously it must be a tough period when you are fit but you don’t play, it’s difficult,’ De Bruyne added of his captain. 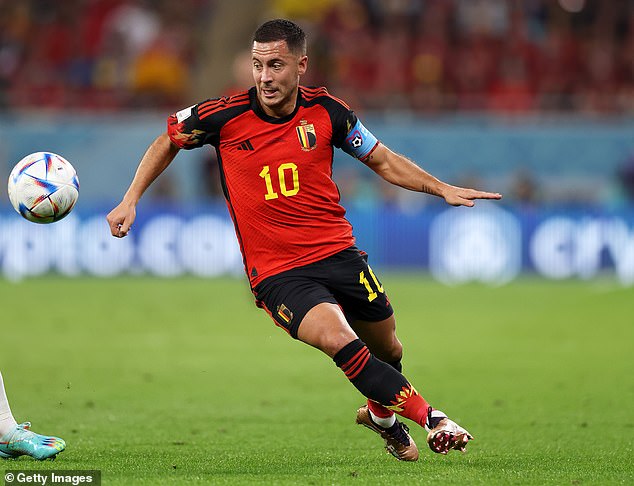 ‘People expect you when you play one time to be at the level you are at your best. It’s very hard and I think his sharpness is coming more and more back, I think he could be important for us coming in this tournament.’

But though the likes of Lukaku, De Bruyne and Hazard – arguably the main proponents of their nation’s so-called “Golden Generation” – are still in the side, many question the Red Devils’ chances of success in Qatar.

‘It’s been some time maybe that the level of our game has not been at our best. I think the team have the level to do better, and that’s why I want the team to do better. I feel we have potential in this team, and right now is the moment to make it come out.’