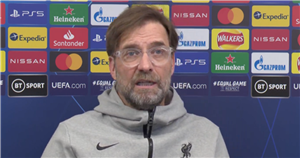 Liverpool boss Jurgen Klopp has said he will not be available this summer amid links with taking over as Germany manager.

Current German national team boss Joachim Low has confirmed he will step down from his position after this summer’s European Championships.

Klopp has often said he may be interested in taking charge of Germany in the future, but insists it will not be this summer.

“If that’s the question we want to ask, if I’m available for the job of coach of the German national team in the summer: No,” Klopp said on Tuesday. “After the summer: No.

“I have three years left at Liverpool don't I? It's simple. You sign a contract and you stick to that contract. I stuck to contracts at both Mainz, Dortmund.

“Jogi Low did an incredible job for so many years, I think it’s the longest servant we had in Germany.

“For sure he’s one of the most successful and did an incredible job really.

“I understand that he wants to have this highlight for him at the European Championship, try to squeeze everything out what he can in the tournament.

“And then somebody else will do the job and with the amount of really good German managers in the moment that the German FA will find a good solution.”

Klopp has impressed since taking charge of Liverpool in 2015, winning the Premier League and Champions League at Anfield.

The Reds have struggled of late and lost their last six home Premier League fixtures.

Though the second leg of their Champions League tie with RB Leipzig will take place in Budapest amid travel restrictions.

Klopp added: “"I am happy to have this opportunity on Wednesday. We've had good moments in this season, Spurs, West Ham recently.

“Consistency is the issue it's nothing to do with Anfield. Nothing bad to say about Anfield. All fine."

READ MORE: Chelsea keep or sell: How squad could look for 2021/22 as Thomas Tuchel shapes side

March 9, 2021 Soccer Comments Off on Jurgen Klopp says he is ‘not available this summer’ in response to Germany links
NFL News