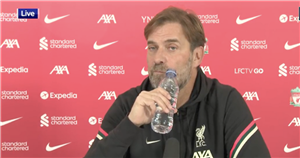 Liverpool could be without as many as ten first-team players for Saturday's game against Arsenal.

Boss Jurgen Klopp confirmed that on top of definite absentees Roberto Firmino, Curtis Jones, Joe Gomez and Harvey Elliott, the Reds could be missing a further six stars for their visit to north London.

The Reds suffered a series of setbacks over the international break with a handful of key players picking up injuries including Andy Robertson, Jordan Henderson and Sadio Mane.

The situation makes for grim reading as Liverpool bid to keep up with Chelsea, Manchester City and West Ham at the top of the Premier League.

Speaking to reporters on Friday, Klopp confirmed that although Sadio Mane should be fit for Saturday, the situation regarding Robertson, Henderson and Fabinho is far from certain.

He said: "So, Hendo and Robbo not trained with team yet, recovery/rehab stuff. Pretty close, a late decision. Sadio is good. Fab came back late and did a recovery session. I hope he can train today, that's the plan."

Can Liverpool get a result against Arsenal? Let us know your thoughts in the comments section below.

Klopp also offered an update on some of the club's other injured players, including Harvey Elliott, James Milner, Curtis Jones, Joe Gomez, Naby Keita and Roberto Firmino, none of whom will feature this weekend.

"The closest are probably Milly and Naby," he said. "I think we've explained already with Curtis, we have take it week by week until anybody gives Us the green light or he gives us the green light.

"Curtis we take it day by day. Harvey is doing really well but there is some time between now and when he can start again. Joe Gomez is doing well, Bobby doing well, needs time."

Klopp also took the opportunity to bemoan the international break, although admitted it did provide him with a window to try and get some of his stars back to full fitness.

"I hate international breaks," he added. "It helped from injury point of view. Coaches have their own targets and very often think they have to do physical work with the players.

"The break was not helpful, I would have loved to have played the week after [West Ham]."